Allied Propaganda in the Lodge Collection 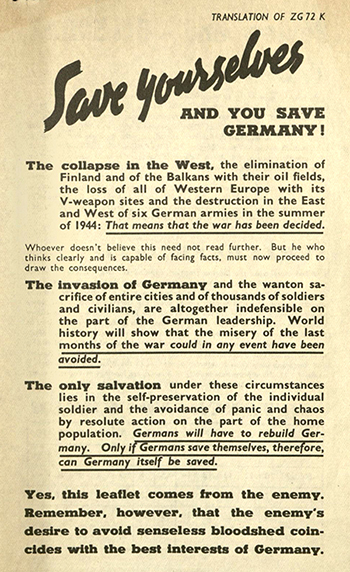 Major William J. Lodge served as a Statistical Officer in the VIII Fighter Command, 417th Night Fighter Squadron, of the U.S. Army Air Force during World War II. He kept copies of propaganda leaflets and newsletters dropped over Germany and occupied Europe during the last several months of World War II. The majority are in Dutch or German, depending on the native language of the leaflets' target audience, but Lodge included official English translations.

The William J. Lodge World War II Collection includes thirty-three issues of a pro-Allied propaganda newsletter titled The Flying Dutchman, which the Allies dropped over the Netherlands from mid-1944 until the end of the war. The Flying Dutchman took its name from the legendary ghost ship doomed to sail the seas forever, without ever making port. According to legend, sightings of the ship are a portent of doom. Allied propagandists likely choose the title as an allusion to the doom they hoped would befall the Axis powers as the Allies surged to victory.

Written entirely in Dutch, but accompanied by English-language translations, issues of the Dutchman consisted of a single double-sided page, with various articles printed in small type to accommodate content that would normally fill several pages. Each issue includes articles and updates selected to convince both the Dutch population and Nazi occupiers that the Allies were guaranteed to win the war, prepare the Dutch population for their liberation from Nazi forces, keep civilian morale high, and promote resistance to Nazi occupiers. Most contained updates on battles at the western and eastern fronts; American efforts fighting the Japanese in the Pacific; meetings and activities of Allied leaders including George VI, Franklin Roosevelt, and Joseph Stalin; updates on bombing campaigns in Germany; and photographs of American, British, and German bombers to help civilians in the Netherlands know exactly who was flying overhead. Also included are occasional updates and photographs of the Dutch Royal Family in exile in the United States, especially shots of Princesses Beatrix, Margriet, and Irene. Later issues include news of the liberation of concentration camps, and photographs of jubilant crowds greeting liberating Allied forces in the Netherlands and other parts of Europe.

Other propaganda leaflets in the collection were dropped on Germany in late 1944 and early 1945. These targeted the German civilian population, aiming to combat years of anti-Allied propaganda produced by the Nazis. Some warn civilians about imminent bombing campaigns so they can protect themselves, or how German civilians could protect their homes and families as Allied forces began the invasion of Germany, especially so older men and boys could avoid forced conscription into the German army. Others informed German civilians of ways they could help speed allied victory and end the war. Many leaflets that were dropped, especially as Allied forces approached Berlin, focused on convincing German civilians that Allied victory was guaranteed, presented American GIs as professional soldiers who bore no ill will to ordinary Germans, and gave civilians an idea what they should expect from Allied forces in the post-war period.

The Lodge collection also includes issues of a single-page newsletter created for Allied soldiers who helped produce and drop these leaflets over occupied Europe, titled "Latest Reports of Leaflet Reactions." These short newsletters communicated the impact of the work. Issues included headlines like "Goebbels Gives Warning: 'Very Clever Leaflets,'" "Safe Conduct Leaflets…Eagerly Sought After," and "Nazis Fight Leaflets with Death Penalty." They also included statements from soldiers, like one that reads "…thanks again for the great assistance, and please pass on my thanks to the gang who are actually doing the dropping. They are doing a great job and it is really being appreciated." Others featured anecdotes from the front lines, like one about a German soldier who persuaded 12 other soldiers to join him in walking to the U.S. line waving leaflets and white flags, ultimately broadcasting his own appeal over the American public address system to German soldiers who had not yet surrendered.