A River Runs Through It

Members of the Portolá Expedition were the first Europeans to see the Los Angeles River, camping on its banks near what is now downtown Los Angeles in the summer of 1769. Franciscan missionary and diarist for the expedition, Fray Juan Crespi wrote, "...we entered a very spacious valley, well grown with cottonwoods and alders, among which ran a beautiful river…". Fray Crespi named the river El Río de Nuestra Señora La Reina de Los Ángeles de Porciúncula, The River of Our Lady Queen of the Angels of Porciuncula, after the annual Feast of Saint Mary of the Angels, which celebrates the dedication of the birthplace of the Franciscan Order. In later years, the name was shortened to the Porciuncula River, and in the years following the Mexican-American War, became known as the Los Angeles River.

For most of the eighteenth century, the Los Angeles River 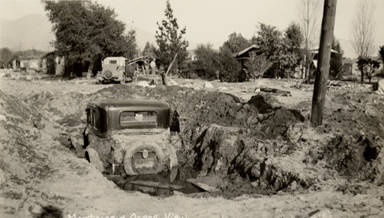 flowed peacefully with occasional flooding during rainy seasons. In 1815 a strong storm caused the River to change its course destroying the plaza and agricultural fields of Pueblo de Los Ángeles. Ten years later, another flood altered the River's course, followed by major floods in 1832, 1842, and 1859. In the winter of 1861-1862, record-breaking rainfall again cut new channels forming natural dams.

Throughout the 1870s and early 1880s, the River occasionally flooded along its banks but was considered at most an infrequent nuisance. As an 1890 article by J.M. Guinn explains, "While floods in other lands are wholly evil in their effects, ours, although causing temporary damage, are greatly beneficial to the country. They fill up the springs and mountain lakes and supply water for irrigation. A flood year is always followed by a fruitful year." 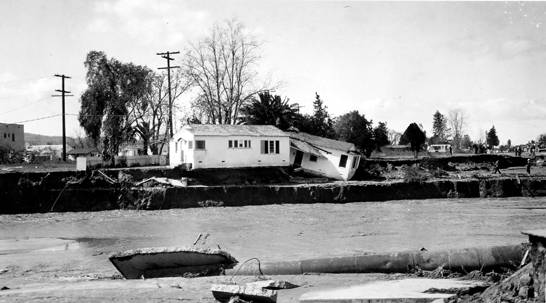 However, the Southern California real estate boom which began in the late 1880s brought thousands of settlers eager to establish farms across the rich floodplain of the Los Angeles basin. Accelerated growth in metropolitan and industrial areas combined with booming agricultural districts worked to increase the population to more than half a million people by 1910, consequently increasing concerns about the potential for property damage due to flooding.

In January and February 1914, a massive storm ravaged the Los Angeles area resulting in more than 10 million dollars in property damage and subsequently legislation which created the the Los Angeles County Flood Control District. Over the next two decades, the Army Corps of Engineers worked to divert the River through a series of concrete channels, constructing reservoirs, dams, and debris basins to further control flooding in populated areas. Despite this transformation, disastrous floods in 1934 and 1938 indicated that more work was needed and thus began a channelization project that would last well into the 1960s, creating a fifty-one mile concrete waterway.

For more information about the history of the Los Angeles River, check out the Homer Halverson Collection, the Catherine Mulholland Collection, and the San Fernando Valley History Digital Library.