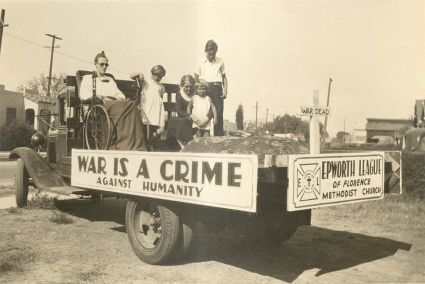 Reverend Wendell L. Miller was a Los Angeles minister and political activist who strongly believed that a church should play a major role in the social and political agenda of its community. Miller was born in Albian, Nebraska on April 16, 1902. Following high school, he attended Nebraska Wesleyan University, graduating in 1927, and went on to earn a master’s degree in psychology and theology at the University of Southern California in 1932.

In 1937, Miller became involved in Los Angeles politics, holding community-wide meetings to address gambling, prostitution, and corruption in local government. Joining ranks with well known restaurateur, Clifford Clinton, the Citizens Independent Vice Investigating Committee (C.I.V.I.C.) was formed with the intent to wipe the city clean of the "gambling dens and houses of ill repute" which were "making people abnormal faster than the police can pick them up, even if they wanted to arrest them." The activities of C.I.V.I.C. soon began to draw the attention of Los Angeles political leaders, lawmakers, police, and the community at large. Taking advantage of the spotlight, the organization worked quickly to launch a publicity campaign against crime and corruption in City Hall. When Mayor Frank L. Shaw responded by denying that houses of prostitution and gambling were a major problem in the city, C.I.V.I.C.opened fire with a recall campaign to oust the mayor.

Miller acted as a charismatic and vocal supporter of the recall effort who claimed, "I know where the gambling dens and the houses of ill repute are to be found, but the police don't seem to be able to find them. . . . I have before me here 15 typed pages of addresses of gambling halls and these houses, which already I have furnished to the police. The decent people of Los Angeles must get together,and force the agencies of the law to carry out the intent of the law." The recall was ultimately successful, Shaw was ousted, and  C.I.V.I.C.-supported Judge Fletcher Bowron was elected mayor.