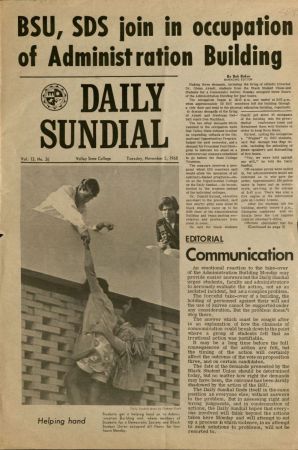 Unrest on campus in the mid-1960s and early 1970s left a lasting impression on San Fernando Valley State College (now CSUN). Special Collections is home to several books and archival collections that discuss this discord, including two books representing different sides of what is known on campus as the "November 4th Incident."

On November 4, 1968 an on-field incident occurred between an African-American football player and his own (white) coach in which the coach (Markham) assaulted the player. The Black Student Union (BSU), led by CSUN student Archie Chatman, demanded Markham be fired for his actions. A meeting was held between Athletics Director Glenn Arnett and the BSU in which the BSU insisted on speaking with acting campus president Paul Blomgren. Students then occupied the Administration Building on campus (now Bayramian Hall), culminating in an agreement between Blomgren and BSU representatives that included educational reforms.

A 1971 book by Earl Anthony titled The Time of the Furnaces recounts the events surrounding November 4th as told by BSU students. In the telling, students discussed what they considered ongoing, systemic racism on and off campus, and specifically within the Athletics department. They recounted a meeting with Athletics Director Dr. Glenn Arnett, the decision to discuss the matter with Acting President Dr. Paul Blomgren, the walk to the Administration Building, and ensuing events, up to and including their convictions on multiple felonies. Several members of the faculty and administration told the story differently. Many of these versions included terms such as "coerced," "intimidated," and "duress." Dr. Blomgren later said, "It appeared to me that the personal safety of the college personnel was definitely in jeopardy."

The events are also retold in John Broesamle's Suddenly A Giant: A History of CSUN, in this case primarily through the recollections of Dr. Stanley Charnofsky, the (white) director of the Educational Opportunities Program (EOP) who had taken on the role of intermediary between the BSU and other factions on campus. In this version, the BSU wanted both Markham and Arnett fired. Charnofsky confirms Anthony's contention that Arnett passed responsibility to Blomgren but insists he could have dismissed Markham because he was a volunteer.

These events polarized the campus for several years, and their effects were even more long lasting. The negotiations subsequent to the November 4th Incident resulted in an increase in the number of African-American and Chicana/o students admitted to the college as well as the creation of today's Africana Studies and Chicana/o Studies departments.