Over the last few years, the Ebola epidemic, a resurgence of measles outbreaks, mutating influenza viruses, and a host of other diseases have caused concern throughout the world. Although many people are afraid that these viruses and bacterium will spread easily and quickly, medical professionals and researchers work hard to let people know about preventative measures and treatments. We have increased our knowledge about disease prevention by disseminating information on websites, and by utilizing social media such as Twitter and Facebook. In the early part of the twentieth century public health officials used different tools for public education campaigns related to health and disease prevention. 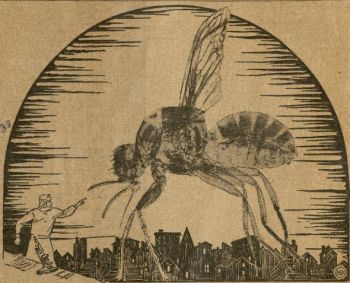 Special Collections & Archives has bulletins, images, newspaper clippings, and other material dating from the early 20th century that demonstrates how the general population was forewarned about the spread and prevention of infectious diseases and viruses.  In the Los Angeles Department of Health Bulletin Collection there are 76 bulletins that explain diseases such as Polio, Measles, and Venereal Disease, as well as preventative measures such as water cleanliness, to inform the public. Most of these were written by a Dr. George Parrish, an elected health officer of the Los Angeles Department of Health.

The Los Angeles Record "Heroes of Health" Articles Collection and the California Historic Photographs Collection also focus on early-20th-century health concerns. A short series titled "Heroes of Health" consists of articles about scientists who work to discover the root causes of diseases and viruses through dangerous tactics. These scientists tested animals, doctors, and even themselves to find cures for highly contagious diseases. The California Historic Photographs Collection showcases images of health facilities in Los Angeles, where families could go to receive vaccines and treatment for health issues.