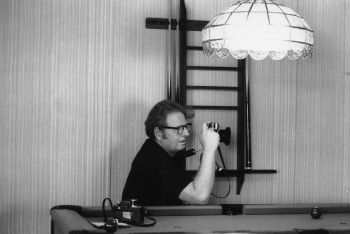 The Richard Fish Collection documents the career of professional photographer Richard Fish. Fish’s work combined the technical and philosophical influence of his mentors with a personal sense of artistic and emotional depth, creating a complex and distinctive style of photography. Although Fish spent much of his career in commercial photography, his work never failed to surpass the simplicity of the objectified image.

Richard Fish was born in Los Angeles on February 25, 1919. After graduating from Beverly Hills High School in 1936, he attended the University of Southern California, where he completed a degree in Cinematography/Journalism in 1940. He worked for Lockheed Aircraft Company in Burbank before being drafted in 1944. While serving as an Army Technician, fourth grade, Fish met Boris Kremenliev, who later became a composer and professor of Ethnomusicology at the University of California, Los Angeles.

In 1947, Fish began attending the California School of Fine Arts in San Francisco (now the San Francisco Art Institute) where he studied with Ansel Adams, Minor White, and other renowned photographers. In 1948, Kremenliev invited Fish to photograph composer Arnold Schönberg and his family for a German music magazine. Many of Fish's Schönberg photographs have been exhibited in Paris at the Chatelet Theater and in Vienna at the Schönberg Institute.

Fish began working for the Los Angeles Times in 1953. In March 1959, the Times sent him to photograph homes in the historic San Angel neighborhood of Mexico City, which marked the beginning of his interest in home and landscape design photography. Fish also experienced a growing interest in capturing images of painters, sculptors, musicians, composers, actors, and writers, and over the years photographed a number of celebrated artists. These included Robinson Jeffers, Rico Lebrun, Peter Voulkos, José Luis Cuevas, Lorenzo Castelnuovo-Tedesco, Jean Arthur, Richard Chamberlain, Bruce Dern, and Igor Stravinsky.

Throughout his mid-career Fish focused on residential and commercial interiors, exteriors, and landscapes, exploring the use of light, space, texture, and color. With a critical eye for staging and styling, Fish captured a vibrant era in the history of home and commercial architecture, landscape, and interior design, during which self-expression and individuality were hallmarks. His photographs and articles appeared in a variety of publications, including Los Angeles Times Home Magazine, Sunset, Better Homes and Gardens, House and Garden, House Beautiful, Home, Chicago Sun-Times Magazine, Garden Design, Southern California Home and Garden, and T.V. Guide. Throughout the 1970s and 1980s, he also photographed many celebrities and public figures, including Ed Asner, Eva and Zsa Zsa Gabor, Eddie Albert, Larry Hagman, Michael Landon, Jacqueline Smith, Liz Claiborne, Frances and Sidney Brody, Robert Wagner and Natalie Wood, and Sobey Martin.