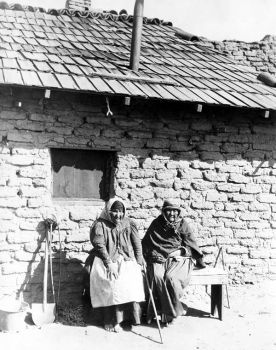 Between 1769 and 1823, under the authority of King Charles III of Spain, Franciscan priests established twenty-one missions in California, to colonize the territory and convert its indigenous inhabitants to Christianity.

San Fernando Rey de España (San Fernando Mission) was established at the village of Achoicominga, one of many Tataviam villages located in the northern part of what we now call the San Fernando Valley. Prior to the mission period, inhabitants of the region lived in autonomous lineages within villages. Each lineage held sovereignty over its local area, and exercised political and economic control. Indigenous peoples practiced exogamy, the custom of marrying outside a community, clan, or tribe. Lineages intermarried with individuals from other groups in order to strengthen social and cultural relationships and expand economic opportunities.

Father Fermin Francisco La Suen founded the San Fernando Mission on September 8, 1797. That day ten children were baptized. By the end of the year, the mission had recorded thirteen adult baptisms, one marriage, and 55 neophytes (indigenous converts to Catholicism). The neophytes of San Fernando were referred to as Fernandeños, after the mission. Over the next two decades, the number of neophytes increased to over 1,000.

As was the case at other missions, the Spanish King expected the San Fernando Mission not only to be self-sufficient, but also profitable. It produced corn, wheat, tallow, soap, hides, shoes, cloth, wine, olive oil, and ironwork, and had over 20,000 head of cattle, sheep, and horses. To achieve profitability and under the authority of the king, priests enslaved or otherwise exploited indigenous people from the local area, as well as villages in present-day Simi Valley, Santa Clarita, Antelope Valley, and parts of the Angeles National Forest for their labor.

Following Mexican independence in 1821, the Catholic Church continued to run the California missions under the oversight of the Mexican government. By 1836, the Mexican government had confiscated all mission properties, exiled the Franciscan friars, and sold the land. The destruction of local indigenous cultures and peoples was well underway by 1848, when California missions came under US control following Mexico's defeat in the Mexican-American War. The total indigenous population at the San Fernando Mission was then approximately 400.

Over the next fifty years, the mission property and buildings were used for a variety of businesses, including a stagecoach station, a warehouse for a local water company, and a hog farm. As late as 1880, there were still a small number of indigenous people living on the property, but it was eventually left to decay, as new settlers appropriated wood, nails, and other building supplies from the structures.

In 1896, the Landmarks Club, headed by Charles Lummis, signed a ten-year lease on the mission, and began a restoration program. In 1923, it became a church again, and restoration came in phases over many decades. Today, the San Fernando Mission is designated as California Historic Landmark #157, and a Los Angeles Historic-Cultural Monument. It continues to operate as a Catholic Church and museum, and also serves as a repository for documents, books, and related materials pertaining to the history of the Archdiocese of Los Angeles.

Images and textual documents related to the history of the San Fernando Mission can be accessed through the San Fernando Valley History Digital Library. Select images donated by the Fernandeño Tataviam Tribe are also available.