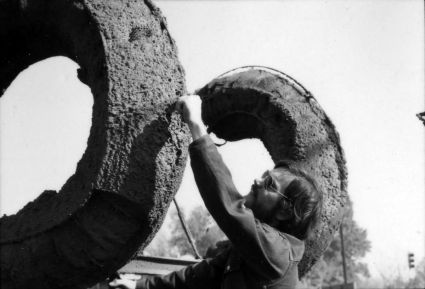 On the corner of Nordhoff Street and Zelzah Avenue is one of CSUN’s most recognized landmarks, the CSUN 'Spaghetti Letters' sign. After two years of planning, five months of construction, and $12,000, the sculpture designed and built by graduate student John T. Banks stood complete. The impetus for the sign was the official renaming of the campus from San Fernando Valley State College to California State University Northridge in 1972. Campus leadership asked students to assist in identifying the campus by organizing a campus-wide contest to create the new sign. Faculty of the Art Department and the Campus Planning Board chose the winner from half a dozen submissions in 1973. The proposal was then forwarded to the CSU Board of Trustees and approved in the summer of 1974.

In 1974, Banks identified the sculpture as environmental art, attempting to blend the sign with its environment. A brief description in the John T. Banks Collection reads:

"This is an environmental sculpture. It is environmental because it directly relates to the environment of the traffic on Nordhoff Street. This sculpture had to fit between two signal lights, one street light, a tree, a bus stop sign and a manhold [sic] cover. Through this maze of obstacles, it clearly reads CSUN from two different directions, or focal points. "

The James F. Lincoln Arc Welding Foundation awarded an Honorarium to this structure in the Structural Steel division in 1974 and the sign was officially dedicated in May of 1975. Information regarding and images of the sign and its construction can be found in the Daily Sundial, the John T. Banks Collection, and the University Archives Photograph Collection.