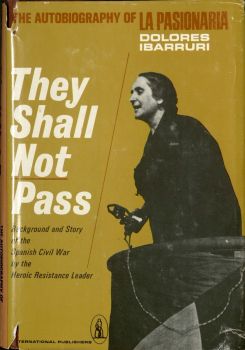 Some Peek in the Stacks blog posts are authored by CSUN students who work in Special Collections and Archives in the Oviatt Library. This week's post was written by  Brenton Contreras, a student assistant and this year's recipient of the Ronald C. and Elizabeth-Ann Purcell International Guitar Research Archives Fellowship. Brenton is a senior majoring in Guitar Performance.

"Spain woke up to a shock on the morning of July 18, 1936. The first shots were fired in Morocco. They were soon heard throughout Spain. From mouth to mouth, house to house, street to street, the alarm was raised: 'The army in Morocco has rebelled against the Republic!'" This statement comes from Delores Ibarruri, one of the primary resistance leaders in Spain’s fight against fascism during the Spanish Civil War. Her autobiography, They Shall Not Pass, recalls the Spanish Civil War in great detail. Here in Special Collections and Archives we have several books that describe and detail the Spanish Civil War. These books range from biographies of people who lived through the events, artwork depicting the war, facsimiles of newspaper articles, and novels from prominent authors.

As night fell Ibarruri spoke on the radio, "It is better to die on your feet than to live on your knees! No pasarán!" said Ibarruri. It was directly after this fiery speech that "No pasarán" or "They shall not pass" became a tremendously powerful resistance cry against the fascists. Quickly, the sights of armed militias became visible throughout Spain, but it was the armed women that won the applause and admiration from civilians everywhere. All members of society were in some way affected by this devastating war. Any person who challenged the fascist government might put their life in jeopardy. The famed Spanish poet, Federico García Lorca, was one of the thousands of people executed by the fascists for his political and personal views.

This was a very tumultuous time in Spanish history, and inequalities were widespread 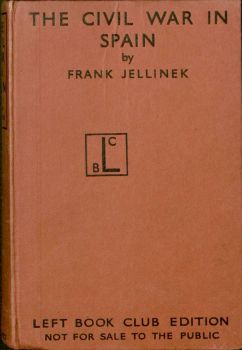 throughout the country. In The Civil War in Spain, Frank Jellinek recounts the many layers of injustice and inequality among the people. In 1936 just prior to the Spanish Civil War, 65% of the population held only 6.3% of the land. Shockingly, 4% of the population held 60% of all land within Spain, indicating that it was not a country poor in resources, simply a country in which much of the population was impoverished. All of this took place in a country where 70% of the peasants were either illiterate or semi-literate. The church purchased many of the best locations and properties and by the end of the 19th century became the largest land owner in all of Spain.

The Spanish army during the 19th century faced numerous revolts that sprang up from patriotism and a deep desire to bring liberty and progress to Spain. Yet ultimately, the army became a praetorian guard that only protected and maintained the stability of the monarchy. As Jellinek recounts, "Spain has been cursed by bad government… its whole economy has been distorted and frustrated for centuries in the interest of certain dominating classes, whose economic interests were necessarily opposed to all modern progress."

Spain ultimately endured a great amount of cruelty under the dictatorship of Franco and his fascist government that nearly tore their country apart. This past April 1st, was the 80th anniversary of the end of the Spanish Civil War, and it is amazing to see how the Spain and its people have recovered. Special Collections and Archives welcomes researchers to come in and explore this important part of Spanish history as it has impacted the lives of Spaniards and others all over the world.