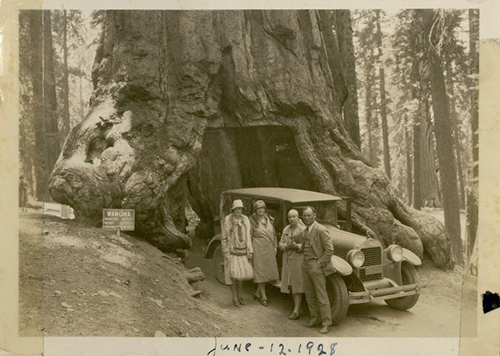 Summer is arriving soon and for many that means taking trips with family and friends, or going to different events that are happening around town, otherwise known as a "stay-cation". In Special Collections and Archives, we have many collections that highlight summer travels and local activities. Some of these include the Alex D. Kennedy Collection, Catherine Mulholland Collection, Esther Brenner "1939" Club Collection, Los Angeles Department of Health Bulletin Collection, and the Herbert Sigüenza Culture Clash Collection.

Alex and Caroline Kennedy took a trip to Hong Kong and China to meet with other Old China Hands and to vacation as documented in the Alex D. Kennedy Collection. Old China Hands are people who were originally from different countries and cultures, but because of varying circumstances, resided and worked in China in the early 20th century. The Kennedy's vacation is evident by the presence of tourist guides and postcards in the collection, which feature locations such as Shanghai, The Great Wall, The Terracotta Warriors, and The Forbidden City, to name a few.

The Catherine Mulholland Collection also contains many photographs of the Mulholland family vacationing in various locations, both locally and abroad. Photos include such places such as Yosemite, where they saw a bear on the side of the road in 1928. The Mulholland family also visited other countries such as Canada, Europe, and Mexico. The collection also includes some “stay-cation” photographs, taken in different locations around Southern California such as Laguna, Santa Barbara, and Long Beach.

There are many summer activities that people enjoy in their own cities, such as fairs, concerts, camping, and festivals. Examples of these events can be seen in several collections, including a Summer Festival '92 Flyer in the Herbert Sigüenza Culture Clash Collection. Some of the festivals that are popular today involve camping at the venue, which some enjoy. Camping is an activity that millions of children, youth, and adults are constantly taking part in, but especially in the summer, which is why it was important for the Health Department to highlight it. The Los Angeles Department of Health Bulletin Collection contains a 1937 article which includes suggestions for making camping as comfortable as possible for children.