Photographer Richard Cross spent 1974 to 1978 as a volunteer in Bogotá, Colombia, working as a photographer and audio-visual consultant for the Peace Corps’ Agricultural Communications program. While there he visited and photographed the Teatro de Cristóbal Colón, in the area of Bogotá near the Presidential Palace and many national museums. The Teatro is constructed and decorated in the grand tradition of many of the world’s ornate opera houses, and is featured as the cover photo in a 2015 BBC Culture article highlighting "Eight of the World’s Most Breathtaking Theatres." Paintings of muses surround a hanging crystal chandelier; four rows of balconies encircle the room. Cross took a series of photographs of the Teatro, some featuring a woman in the foyer and in her balcony seat, some showing the audience and the splendor of the theater interior. 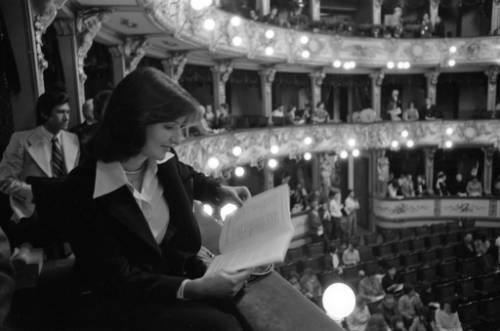 The design of the Teatro de Cristóbal Colón, including its horseshoe shape and painted house curtain, was based on the layout of the Palais Garnier that houses the Opéra National de Paris, but it is largely Italian in its features. The theater was designed by the Italian architect Pietro Cantini, with construction beginning in 1885 and finished in 1892 for an opening coinciding with the 400th anniversary of Cristóbal Colón’s arrival in the Americas.

The six muses in fresco on the ceiling, each draped in a robe in a different color of the rainbow and each perched on a background of clouds, were painted by Italian artists Filippo Mastellari and Giovanni Menarini. Each muse is surrounded by an ornate painted cartouche, with detailed flowers surrounding and dividing. One holds a lyre, one blows a horn, and one holds a book.

Designer Luigi Ramelli was the maker of the theater’s decorative central light fixture, which is surrounded by the fresco muses. Ramelli was Swiss, not Italian, but studied in Italy, and lived much of his life in Colombia. The central lamp was designed to run on electrical power at a time when electricity was uncommon in Colombia, so a coal-powered steam plant was constructed in the theater’s basement to generate the power. A few years later, when the nearby Presidential Palace needed electricity, the power plant was already in place.

In 1948, when the Teatro was one of the venues for the Pan-American Conference held in Bogotá, the Ramelli lamp was replaced by a hanging chandelier of Czech crystal. This is the fixture that appears in the Cross photographs in the 1970s (and, incidentally, in the 2015 BBC article, clearly using an old picture). The crystal chandelier remained in place until the 1990s, when visibility and ceiling damage became issues, and the original fixture, still preserved, was reinstalled.

The house curtain was painted by Annibale Gatti in Italy and shipped to Bogotá in 1891. It depicts indigenous Colombians, conquerors, and fictional characters from operas and plays, including Hamlet, Don Juan, Carmen, Rigoletto, and Faust. The curtain does not appear in Cross’ photographs.

The theater includes, besides the main hall, two smaller spaces for performances and meetings: the Victor Mallarino Room, which is not included in Cross’ photographs, and the foyer, where the woman poses for Cross with her program and a cigarette while other theatergoers chat in the background.

The Teatro de Cristóbal Colón closed temporarily for a renovation in 2008, which took six years, and reopened thoroughly restored in 2014. It continues to mount operas, plays, ballets, and concerts in classical, contemporary, and traditional styles, and has a website, Facebook and Instagram pages, and virtual shows and tours.

The Richard Cross Collection is wide-ranging; he documented places and events all over North and South America.  The context of his visit to the Teatro is unknown; there is no record of the exact date, the opera, play, or concert on the program, or the identity of the woman in the photographs.

View additional Richard Cross photographs and learn more about his work when you visit Digital Collections.