On January 24th, 1848, while a work crew labored to build a saw mill for John Sutter on the American River at Coloma, carpenter James Marshall spied a few glittering stones just below the surface of the water. Marshall’s discovery of gold at Sutter’s Mill ignited one of the most iconic periods in American history – the California Gold Rush. Special Collections and Archives holds several collections that bring the California Gold Rush to life.

One of the most compelling collections, the Thomas G. Lambert California Gold Rush Letter Book, captures the experiences of a young gold miner in a letter to his "Dear Parents." Lambert writes from Campo Seco, a miner’s camp located in Calaveras County. Campo Seco was first inhabited in 1849 by Mexican miners from Sonora who were quickly outnumbered and overrun when the great migration of gold seekers began in earnest. Lambert writes, "As I am in Cal. Of course I must shroud my money affairs in the most obscure mystery, otherwise I should not enter into the true spirit of California ism." 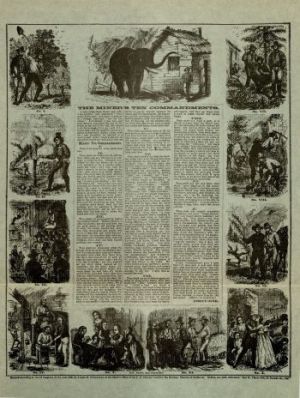 Lambert’s letter describes a host of colorful characters, including Johnathan Mayhew, who "will get a $ where other people can get 50 cts," and whose "manner of getting is not quite in accordance with the strict discipline of the Methodist Church." He writes of William Look "mourning over his hard fortune and making everyone sick with his doleful tales," and Daniel Flanders, who "spends much more money on hair oil and fancy card paper than he does dissipation."

Lambert worked for Phillip Smith, a man whose one third interest in a claim was mined by fluming. By 1855, independent gold miners had exhausted much of the easy placer mining throughout California. As Lambert explains, "The system of mining is so different from what it was…men two or three thousand feet into a hill, and 150 feet below the surface of digging for the hidden treasure…Today I have seen a Comp. getting gold from the bed of a river with the river itself running directly over their heads. This fluming business generally pays heavy, but sometimes they git nothing after a cost of many thousand dollars."

Far from home and family, and strict in his moral and religious beliefs, Lambert sought entertainment and camaraderie at the occasional political meetings held in town. Lambert writes, "Last evening (Sat.), a large assembly for the place was addressed by Col. Johnson, the K. N. candidate for governor, and by Judge Terry, who is also a distinguished member of the order." The Know Nothing (K. N.) Party, whose official title was the American Party, was largely dominated by middle-class Protestant males who strove to limit the political power and influence of Irish Catholics, Germans, and other immigrants. Lambert is clearly a supporter of the nativist doctrine, noting that "The 6th of Sept. is our gubernatorial election when the greatest question is to be decided whether California will be ruled by true Native American principles or still submit to foreign influence." Ultimately, Colonel J. Neely Johnson won the election of 1855 and became the fourth governor of California, yet in the years that followed the Know Nothing Party fractured over slavery issues, and ultimately disintegrated across the rest of the United States.