Van Nuys, Then and Now 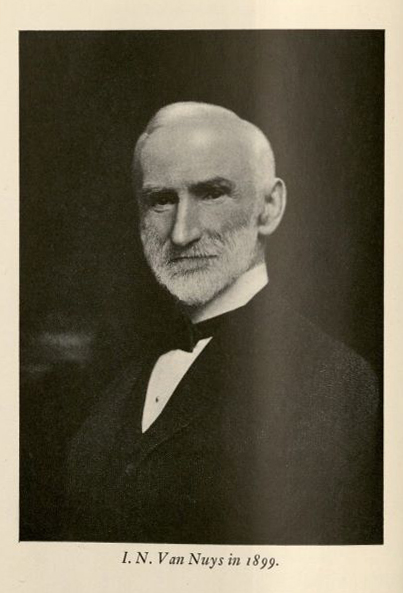 Los Angeles is a key shaped city spread cross a large swath of Southern California. Encompassing almost 470 square miles, the City has almost twice the landmass of Chicago. One of the more interesting aspects of the area is its multitude of smaller districts, towns, and neighborhoods that fan out from the city proper. Van Nuys is one of these towns.

Isaac Newton Van Nuys settled in the Los Angeles area in the 1870s and owned much of the southern portion of the San Fernando Valley, totaling about 47,000 acres of land. By the turn of the century, Van Nuys had become a successful businessman, farmer, and rancher whose holdings included half interest in the Los Angeles Farming and Milling Company. In 1909, Van Nuys sold the land to the Los Angeles Suburban Homes Company, which began selling property in a planned housing development across Van Nuys and the San Fernando Valley in 1910. The community of Van Nuys was officially founded on February 22, 1911.

Although Isaac Newton Van Nuys passed away the following year, many monuments to his name remain today. In downtown Los Angeles, Van Nuys built his own hotel on the corner of 4th and Main. When it opened in 1897, the opulent hotel was the first to offer electric and telephone service in each room. The hotel is still in operation, now called the Barclay.

The city of Van Nuys was annexed to Los Angeles in 1915. At the time, Van Nuys had a population of around 2,000 people. In 1914, a high school was opened in the growing Van Nuys. The main building was completed in 1915 but later destroyed in the 1933 Long Beach Earthquake. Remnants of the 1915 building were incorporated into a new main building and auditorium. The Van Nuys High School auditorium was designed with a large beautiful pipe organ, built by a company also located in Van Nuys. Although damaged in the Northridge earthquake, the pipe organ was restored in 2004.

In 1932, the city built a municipal building in Van Nuys.  Located at the corner of Sylmar Avenue and Sylvan Street, the building looks quite similar to Los Angeles's downtown city hall. After the Northridge earthquake in 1994, the building was renovated, and then restored in 2005. The "S.S. I.N. Van Nuys" was the 332nd liberty ship built by the California Shipbuilding Corporation in San Pedro. The ship was launched on February 23, 1944, and after the war was sold for scrap metal in 1947.

The Los Angeles Metropolitan Airport in Van Nuys opened in 1928. During World War II, the airport was purchased by the US War Department. In 1949, the City purchased the property for $1, and the airport returned to civilian aviation use. In 1947, General Motors built the Van Nuys Assembly plant .The factory was in operation for decades and built such models as the Chevrolet Corvair, Camaro, and Pontiac Firebird. In 1998, the factory was torn down and retail and entertainment businesses were built on the property.

In 1954, Anheuser Busch built a brewery in Van Nuys. Located on 95 acres, the brewery is still in use today. In 1966, August Busch Jr, grandson of founder Adolphus Busch, began purchasing additional property around the brewery and spent $4 million to create the Busch Gardens theme park with a tropical landscape. You can find images of the Anheuser Busch brewery in the publication,  Community Guide: Greater Van Nuys Area Chamber of Commerce.  As attendance at Busch Gardens dwindled, the theme park was shut down in 1976, though Busch Gardens continued to operate as a bird sanctuary for a few years. Today, the Anheuser-Bush Van Nuys Brewery produces more than two dozen brands of beer with 275 semi-trucks leaving the property seven days a week.