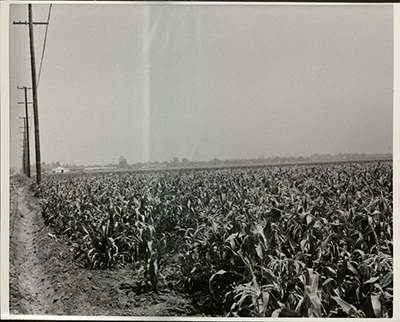 The Industrial Association of the San Fernando Valley, now known as the Valley Industry and Commerce Association (VICA), is a non-profit organization created to bring industries and commerce to the San Fernando Valley. The San Fernando Valley housing development was beginning to boom in the 1950s, and VICA’s mission was to bring commerce and employment to residents as opposed to having them drive “over the hill.” The bulk of the collection is from VICA's Board of Directors, consisting of meeting minutes, agendas, speaker biographies, and meeting notices.

A few highlights from the collection are its membership documentation, records of construction of the Van Nuys airport, environmental studies conducted in sites across the valley, and residential development in the Valley. Meeting minutes from January 1952 state that VICA would like to grow to 100 members by Februrary 1, 1952, and they had or were in the process of acquiring memberships from Valley Times, West Valley Chamber of Commerce and Van Nuys Chamber of Commerce. When VICA started, they did not struggle to obtain members because people were interested in joining, however the membership was not as substantial as it is today. Today, their board of directors alone has 73 members, including CSU Northridge, the Los Angeles Rams, Los Angeles Valley College, LA Metro, financial institutions and more. All of these entities have a say in the development of the San Fernando Valley through their involvement in politics and different commercial entities in the area.

Other topics that are discussed in the collection are in regards to developments in and around the entire San Fernando Valley ranging from Van Nuys to Woodland Hills and Chatsworth to Encino. Some of the issues discussed in the 1950s were Anhauser-Busch’ development from crops on Roscoe to a large factory. The Van Nuys airport in particular was something of interest because of increased commerce and economic development it brought to the valley. Being a large organzation involved in urban development, VICA also wanted to address the concerns of local residents as the valley developed. It worked to keep jets quieter at Van Nuys airport so residential development would continue, as one example. They also concerned themselves with the environmental impact of various development plans, especially air quality.

One noticeable difference between photographs from the 1950s and today’s membership is the appearance of the membership and board of directors, which over the decades has increased in diversity in all aspects, reflecting the population of its members and board of directors, residents of the valley, and in Los Angeles more broadly. In the 1950s the people photographed at VICA events were overwhelmingly white males. Today as membership continues to grow, the membership looks a little bit more like the community it serves.