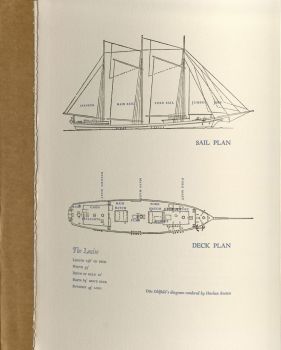 When presented with the idea of 19th century whaling, most people think of Moby-Dick, Ishmael, and Ahab; or perhaps a hand-thrown harpoon or scrimshaw. Others see full rigging and square sails; ships, barques, and schooners; whaleboats manned by rowers and a harpooner; or the less romantic side of whaling: death, blood, and waste.

Moby-Dick is cited as a tale of man vs. nature or more narrowly man vs. beast. It is also a cautionary tale, telling readers of the harm wrought by Ahab's vengeance, his single-minded pursuit of the white whale and its annihilation that culminated in Ahab's destruction, as well as that of his ship and its crew. There is no shortage of literary criticism of the novel. Some scholars believe that Moby-Dick contains a significant biographical bent, likening Ishmael to Melville. Scholars have pointed to several parallels between Melville's life and that of his narrator Ishmael. For example, both were in financial need before signing on a whaler and both were former school teachers who hadn't been paid for their services. Also critical to the construction of Moby-Dick is that Melville worked on a whaling vessel when he heard tale of the Essex, a whaler sunk by a sperm whale in the Pacific Ocean during the 1819-1820 whaling season.

There is little doubt that scrimshaw is a significant form of American folk art. In Scrimshaw History (1986), author Robert Mount discusses the term scrimshander (one who produces scrimshaw). While Mount affirms that the origins of the term are obscure, he suggests "scrim" from an 18th century theater backdrop and "shander" from a nautical term for those that were frequently idle (pp. 2-22.) 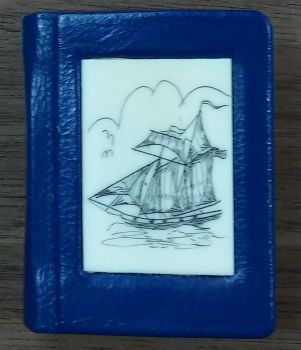 in the copious free time they had sailing from ports to whale hunting grounds, or between whale sightings. Whaling crews tended to be large by comparison those of other vessels of the day as they required crews to man the multiple whale boats that went hunting in addition to a crew to man the ship itself. Many captains kept whale teeth on board or encouraged others to keep the teeth for future use. They were then encouraged to undertake scrimshaw work, heeding the verse, "idle hands are the devil's workshop." A sailor would use simple tools (almost any sharp pointed instrument) to etch into the whale tooth, then use ink or some other similar substance to highlight those etchings.

The log book of the whaler, Ocean Bird, as edited by David A. Henderson (of San Fernando Valley State College, now CSUN) was compiled from "two versions in the Bancroft Library, University of California, Berkeley ...". On this voyage, Captain Scammon led his whaling fleet to a breeding and calving ground in the Sea of Cortez. The volume includes text of the log reporting the 1858-1859 season (from November-April), as well as notes of explanation provided by the editor. Entries provide insight into daily activities of whalers and their crews including the dangers, the excitement and the boredom. Examples include the following:

Calm and hazy at daylight - at 7 o'clock the Kate started to look for wood - at 11 o'clock saw the first whale for this season - going quick up the Lagoon - one boat was off turtling and gunning at the time. - she came on board with four turtle and 20 curlew - At 4 P.M. got under way it being the last of the ebbtide and runn [sic] up as far as the mouth of Fort Lagoon and anchored in 3 1/2 fms water - sandy bottom - the A.M. Simpson anchored 1/2 mile ahead - saw two more whales comming [sic] up - ends with a light breeze from W.N.W. (19).

At daylight calm - at 8 o'clock a light air from S.E. and clear - today being the Sabath [sic] we do not go in pursuit of whales - H.H. Paul is still off duty with venerial [sic] - middle and last part of these 24 hours calm and warm - objects at a distance look long and low andthe lagoon is as smooth as a mirror - so ends this day.

The International Whaling Commission banned commercial whaling in 1986. In the 21st century whaling continues to be a hotly debated topic worldwide, for its environmental impact, the future of threatened and endangered species, and those who have traditionally hunted whales.