Most of the earliest photographs were not printed on paper, but on sheets of metal or glass. These photographs capture extraordinary details, and give us a glimpse of life in the 19th century. In Special Collections and Archives there are many examples of photographic portraits that give an incredibly detailed view of fashion, personal adornment, and interior design. While the images themselves are beautiful, the photographic processes used to create the images are equally fascinating. 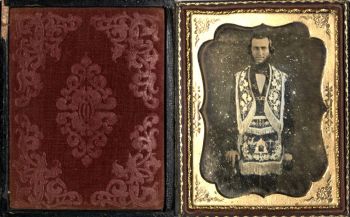 Daguerreotypes are often considered the first practical form of photography. The process was invented by Louis Jacques Mande Daguerre in 1839, and the richness and detail of the images surpasses even those of modern photographic techniques. The photographic image was made by exposing a silver-plated copper sheet to iodide, which created a light sensitive coating. The plate was then exposed to light for a range of 5 to 70 minutes, held over mercury vapors, and finally fixed with hypo solution. Daguerreotypes are identifiable by their mirror-like surface, and are almost always encased. While the details of a daguerreotype will never fade, the surface is extremely fragile and tarnishing on the silver-plated sheet can completely obscure the image over time. To prevent tarnishing, daguerreotypes were places in box cases and sealed between a backing and a glass cover. These box cases can be very ornate, and are typically made with a variety of materials such as wood, leather, velvet, and metal.

Ambrotypes are often confused with daguerreotypes 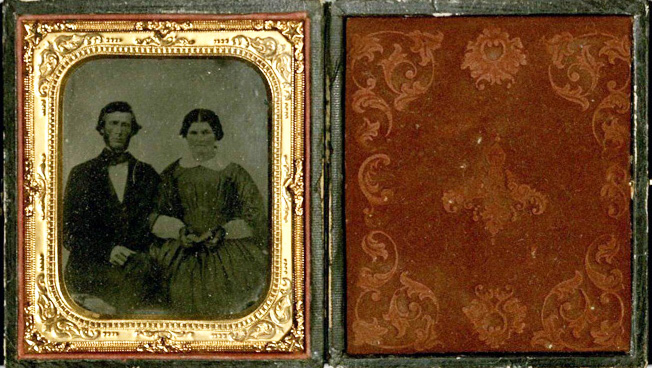 because they are housed in the same type of case. Ambrotypes were made by applying an iodized collodion coating and silver nitrate bath to glass plates. The glass plate was underexposed to produce a fainter than usual negative image. A black or dark backing made of paint, fabric, metal, or paper was used to make the negative image appear positive. In some cases, the glass plate is a dark color, such as ruby or dark green. The ambrotypes were placed in ornate box cases to protect the fragile glass plates. This type of photography was very popular and widely available from the 1850s through the 1880s, largely because ambrotypes were cheaper to produce than daguerreotypes. If you look closely at the woman here, you can see her cheeks are rosy. Ambrotypes, like daguerreotypes, could be hand painted with color or gold to make the photo more appealing. 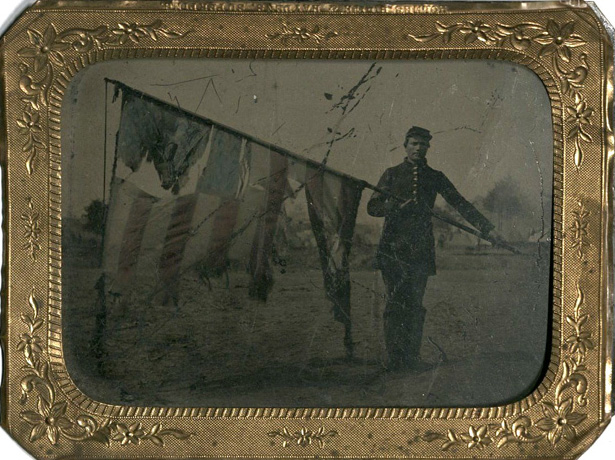 Tintypes used the same wet collodion process ambrotypes did, but the process was applying thin sheets of iron coated in black or dark brown paint instead of glass. The process was developed in 1856 and was extremely popular in the United States as tintypes were cheap, thin, and more durable than ambrotypes or daguerrotypes. Some tintypes were placed in decorative box cases, but the majority were placed in paper frames or left loose, which made the photos easy to send in the mail. Tintypes were especially popular among Civil War soldiers and their families. Many photographers set up shop in military camps.

Paper photography ultimately triumphed over metal and glass techniques, largely because they were easier to use and cheaper to produce. Photo paper coated with albumen, collodion, or gelatin allowed for increasing detail to be captured in a shorter amount of time.  Both the Nineteenth Century Photograph Collection and the  John M. Sell Civil War Collection contain excellent examples of daguerreotypes, ambrotypes, tintypes, and as well as other early forms of photography.