CalShip and the Liberty Fleet

In 1936, the United States was midway through the worst economic disaster ever to hit the country. As spring turned to summer, the U.S. Congress passed the Merchant Marine Act of 1936. This new law replaced the United States Shipping board. With the number of U.S flagged merchant vessels standing at roughly 25,000, the newly created United States Maritime Commission was given a number of tasks, one of which was to build a larger, faster merchant marine fleet. With this mandate, shipyards began to be built on the Pacific and Atlantic coasts in the 1930s and 1940s.

The shipyard property was a marshy, weed-infested area that had previously been home to a Japanese-American community. The west half of the island is in the city of Los Angeles while the other half belongs to Long Beach. With the United States' entry into World War II, shipbuilding became giant industry up and down the west coast, with CalShip one of the focal points in Los Angeles' war effort. CalShip's first completed cargo ship was the S.S. John C. Fremont, launched September 27, 1941, just ten weeks before the US entered the war. 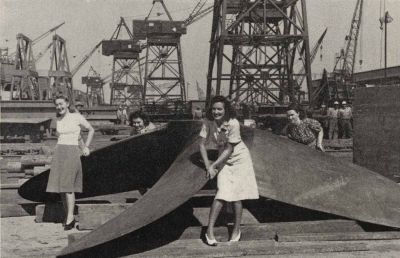 Under contracts from the Maritime Commission and Navy, Los Angeles was home to a thriving shipbuilding business throughout the war. Workers from every region of the U. S. migrated to the city for work, and Calship was one of a number of shipyards in operation at the time. Bechtel Corporation owned and operated Calship under the leadership of S.D. Bechtel. Founded in 1898, the Bechtel Corporation is privately held and still operates today, having worked on the Hoover Dam, and helping to rebuild New Orleans after hurricane Katrina.

At CalShip, forty thousand men and women worked on US Government contracts for four years to build 467 vessels known as the "Liberty Fleet." These cargo ships were constructed faster and less expensively than traditional cargo ships, in large part because some components of each ship were pre-fabricated, and parts were welded together rather than riveted, which cut construction time in half. Using these much quicker ways to build ships, by 1943 construction of one vessel took less than 60 days. By 1945, the number of American flagged merchant ships had surged to 29,797.

The Liberty Ships were an important element in supplying armed forces overseas with material desperately needed for combat operations. While originally designed as a cargo ship, the liberty fleet was modified to carry people overseas as well. After the war's end, the Maritime Commission and the Navy department began canceling contracts, and the shipbuilding industry fell rapidly to the wayside. CalShip closed in September 1945 after the launching its last ship, the SS Council Bluffs Victory.