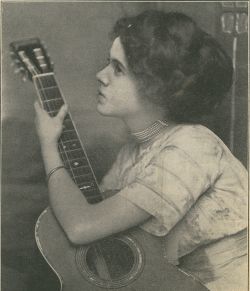 of information about classical music, the guitar, and the city of Los Angeles, including several hundred concert programs from across the world that Olcott-Bickford (1885-1980) collected over her long career. Having assisted Philip J. Bone in assembling one of the seminal books on guitarists, The Guitar and The Mandolin, she knew that preserving her current experiences with the guitar would enrich the knowledge of those who followed her. And we are grateful for the images and records of concerts by early legends of the instrument, such as the Carnegie Hall concert by Tarrega’s student Pascual Roch in 1918. 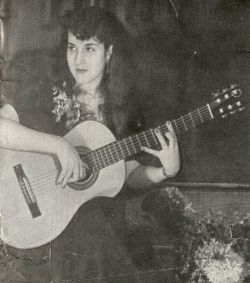 One thing that becomes apparent is that concerts tended to have more than two parts to them, as is the current custom.  Many of the concert programs, especially from the early part of the 20th century, were divided into 3 and sometimes 4 parts. Also, it was normal to only play one or two movements from a larger multi-movement work, in contrast to the current fashion of the complete presentation of sonatas and suites. Note the program at Wigmore Hall by Julian Bream from 1952, (famous amongst guitarists for the introduction of his lute-skills to his concerts) which is divided into 3 distinct sections, and single movements from larger works by Torroba, Weiss and Bach are performed.

Through these programs, we are also taken through a history of classical concerts in Los Angeles. The concert program of Olcott-Bickford performing with Soprano Cecilia Dvorak is notable for the American premiere of something that was rare in the classical world at that time, a piece for guitar by a major composer, in this case, a song by Finnish composer, Jean Sibelius. It also displays the history of concert-going in Los Angeles, as the concert was presented at Pepperdine College, in their first location in South Central Los Angeles, before the move to their current Malibu home. Another example is the program for guitarist Rey de la Torre in 1955, presented by Monday Evening Concerts. The series, at that time 16 years old, continues to this day as a pillar of adventurous classical music programming for Los Angeles.

One other interesting aspect of this collection is the 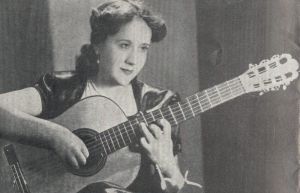 prominence of female classical guitarists represented.  In a largely male-dominated classical music scene, Ms. Olcott-Bickford, understandably, paid a good deal of attention to the women who were talented, outspoken, and brave enough to pursue a career in music, much like herself. From lesser known players like the American Marguerite Lichti and Argentinian Maria Angelica Funes, to the very prominent and esteemed Luise Walker, Maria Luisa Anido, and Ida Presti, we are left with the impression that a female presence in the classical guitar scene was a strong one, and that their influence on the developing instrument was felt broadly.

Maria Luisa Anido is listed as performing her Wigmore concert partially on Francisco Tarrega’s Torres guitar, perhaps one of the most famous guitars in music history. This isn’t to say that the classical guitar world was without its gender biases. In a 1952 letter to Ms. Olcott-Bickford from Boris Perrott (one of Julian Bream’s early teachers), he states that “Anido specialized on solo-left-hand-playing: her tone is extremely powerful, man-like,…”. It would seem that although there were biases that these pioneers of the instrument needed to overcome, they did so through their superior artistry and captivating concerts.