Special Collections and Archives holds a number of collections that document the history of the American Civil War through personal narratives, photographs, correspondence, and official records. While small collections are sometimes overlooked by researchers, their contents can often pique our curiosity and lead to fascinating discoveries about the lived experiences of American Civil War soldiers and their families. 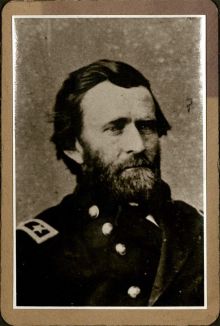 The Stiles E. Forsha Collection consists of items related to the attempted resignation of Union Soldier Stiles Ely Forsha from his position as the Regimental Quartermaster of the 7th Regiment, Iowa Infantry in 1862. On the backside of Forsha’s resignation letter, dated September 14th, 1862, we find a note from Forsha to an unknown recipient. The collection also includes the Union Army's response denying his resignation, which is signed by five Union generals, whose photographs are included in the collection, along with an additional unidentified photograph.

A close look at the correspondence in this collection reveals some interesting details. As in the case of many soldiers, Forsha’s absence from home had affected his family and business. As his letter of resignation describes, “ ...my business and personal affairs at home require my immediate attention, that I left home on very short notice expecting to be able to return and make the necessary arrangements for the settlement of business.” A frustrated Forsha also notes that a previous request for twenty days furlough in June 1862 had been denied.

Using the information contained in Forsha’s resignation letter as a starting place, a quick online search leads to the Roster and Record of Iowa soldiers in the War of the Rebellion:Together with Historical Sketches of Volunteer Organizations, 1861-1866, Volume IV,  which documents Forsha’s  enlistment in the Union Army as a full 1st Lieutenant in Company I, Iowa 7th Infantry Regiment on August 2, 1861. He was promoted to full captain and mustered out on November 20th, 1862, then commissioned as an officer in the U.S. Volunteers Commissary Department Infantry Regiment on the same day.

Forsha is also mentioned by name in Volume I of this publication, in an account of the Battle at Corinth by Major Elliot W. Rice  who recalls, “The enemy's battery was placed directly in front of my command, and a most terrific cannonading ensued. My men held this position firmly and unflinchingly for one hour and a quarter, exposed to a murderous fire of shell and canister... My command had fired the whole of the sixty rounds of cartridges with which it had been supplied in the morning, but was immediately supplied, without leaving the field, by my excellent quartermaster, Lieutenant Forsha, who, regardless of personal safety, was ever ready to supply my command with ammunition, even in the heat of battle.”

A search of the 1850 United States Federal Census reveals that Forsha was born in 1831, the eldest of four children in Harrison Township, Scotland County, Missouri. The Forsha household also included one adult female and six children ranging in age from one month to nine years, all listed as slaves. According to the Lineage Book of Hereditary Order of Descendants of Colonial Governors, Stiles married Adelaide Campbell in 1852. Sadly, on the same day that Forsha requested a discharge from the Union Army, his infant son, Stiles Jr. was laid to rest at the Highland Cemetery in Eddyville, Iowa.

A short note on the back of the resignation letter reveals more hints. It begins by saying, “I enclose this that you may see why I have not been able to get a leave of absence or discharge - I hope [Isaac] will succeed in getting our business closed by the 1st of [March] or April next so that he can join [the ] Army if he thinks best.” Who was Isaac? And what business was Stiles in?

The 1856 Iowa State Census lists Stiles, Adelaide, and their two small children as residents of Eddyville in Columbia Township, Wapello County, Iowa. The 1860 United States Federal Census documents Stiles and Adelaide living in the same location, now with three children, along with Isaac and Eveline Stanley (nee Campbell) and their son. Thus, the family and business connection is established with the marriages of Stiles and Isaac to the Campbell sisters. Stiles’ value of real estate for this census year is $16,000 and the value of his personal estate is $19,000. The Products of Industry Schedule for that same year lists his business as the “pork packing Industry.” The combined relative value of Forsha’s estate in today’s economy would be more than a million dollars.

Forsha was mustered out of the Union Army for good on March 4th, 1863, and in August 1864, lost another son, 3 month old Arthur, who was also buried at the Highland Cemetery. Sometime between 1866 and 1868, the family moved to Glenwood Township, Schuyler County, Missouri. The History of Adair, Sullivan, Putnam, and Schuyler Counties gives an account of his activities in Glenwood, where he and his brother, Alexander, erected a storehouse, a number of dwelling houses, and a schoolhouse. The 1870 United States Federal census lists Stiles E. Forsha as a retail dry goods merchant, with combined property and real estate valued at $45,000.

In June 1876, his eldest son, William, passed away at the age of twenty-two, and in April of the following year, a fire destroyed much of his commercial property, including a stable, warehouse, and store resulting in losses of nearly $8,000.  In 1880, Stiles appeared on the  United States Federal Census as a farmer living in Custer City, Dakota Territory. Little is known about the Forsha family over the next decade, but sometime between 1880 and 1890 Stiles and Adelaide made their way to Los Angeles, California where they lived with daughter Katie and her husband Frank Irvin, whose papers are also held in Special Collections and Archives. In 1895, Stiles was admitted to the U.S. National Homes for Disabled Volunteer Soldiers in Sawtelle, Los Angeles County, California, where he lived until his death in 1911.