The Ku Klux Klan was originally founded in 1865 in Pulaski, Tennessee. The organization was primarily made up of Confederate veterans of the American Civil War, and operated under a decentralized structure in which local chapters and bands were highly independent. From their creation, this organization believed that their group gained power with each member recruited. However, by the late nineteenth century, this first manifestation of the Klan was essentially defunct. 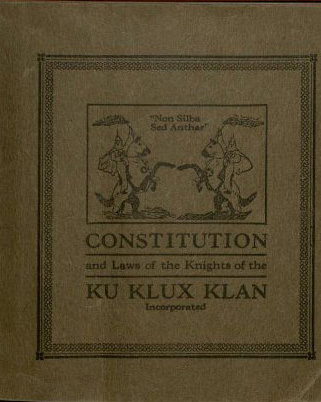 In 1915, the second Ku Klux Klan was founded by William J. Simmons in Atlanta, Georgia. By the 1920s, social tensions brought on by rapid industrialization and increased immigration in urban areas had set the stage for the Klan’s expanding popularity. Unlike the first Klan, the second Klan was a centralized fraternal organization, with a national and state structure, which rapidly spread from the South to the Midwest and Western states. The purification of politics, anti-Catholicism, the enforcement of prohibition, and nativism formed the nucleus of the second Klan’s objectives and goals, summed up by their credo, “One Hundred Percent Americanism.” Membership in the second Klan appealed to lower, working, and middle class white Protestants from urban areas, who’s fears and concerns over jobs and housing played into the Klan’s philosophies. The Ku Klux Klan (KKK), Realm of California Records contains materials which shed light on how this organization gained popularity in the first half of the 20th century.

As the Klan Laws and Constitution describes, the organization was a secret society that considered themselves an “Invisible Empire,” reaching out to as many people as possible. According to their Consitution, written in 1921, new members were brought in with the understanding that they would be required to follow a strict set of rules in order to maintain membership. Like the first Klan, members had to be white Protestants, but also could not associate with any persons of different races or religions. Once initiated into the Klan, members belonged to the group for life. If for any reason a member broke a rule, there were serious repercussions. In the Ku Klux Klan Realm of California collection, for example, there are several letters from Edward Young Clarke, a Klansman who wished to retire from the group. However, retirement from the KKK was not permissable. A response dated two years later banished Clarke from the KKK.

The collection also includes correspondence between the main office of the KKK and members regarding audits and gatherings. One piece of correspondence calls “… all Kleagles, Exalted Cyclops, Terrors & Klansmen” to gather for a naturalization ceremony, bringing together as many new Klansmen as possible to demonstrate the group's increasing popularity. By 1924, at the height of the second Klan’s popularity, national membership rose to 6,000,000. By 1930 it had dropped to 30,000. Throughout the early 1940s financial difficulties, chronic internal conflicts, external opposition, and the exposure of criminal behavior diminished the organization’s power and appeal, and by 1944 the organization's national charter was revoked.