Love and Friendship in the Archives

This week’s blog is inspired by Valentine’s Day. In the United States, Valentine's Day is celebrated on February 14th, and traditionally involves the giving and receiving of cards, gifts, or flowers, the reciting of poems, singing of songs, and other expressions of love and friendship.

One of the largest collections in Special Collections is the Vern and Bonnie Bullough Collection on Sex and Gender. This collection contains a number of books that deal with human relationships, such as En Amour, a French language book that features quotations about romantic love between a man and a woman. 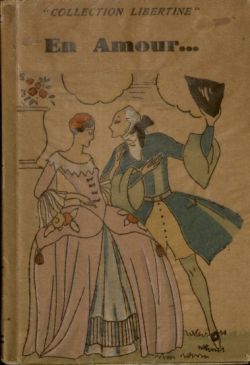 The Homosexual Information Center Collection also includes many book titles that focus on love and friendship, including A Treasury of Friendship , an anthology compiled and edited by Ralph L. Woods. Die Schönsten liebesbriefe, by Ursula von Wiese, is written in German and contains various love letters between famous persons, including Wolfgang Amadeus Mozart and Konstanze Weber. The Anthology of Friendship, first published as Ioläus in 1902, is a book about friendships from the "Pagan and Early World" to "The Renaissance and Modern Times".

In the Emanuel Haldeman-Julius Little Blue Books Collection topics range from the humorous to the sincere, with titles such as, Jokes and Clever Sayings about Kissing, Memoirs of Casanova: The World’s Greatest Lover, and Love from Many Angles. The Puck Cartoons Collection includes an image of the unlikely marriage between love and politics. Puck magazine's February 1907 cover depicts a man in a dress somberly holding a portrait of an elephant symbolizing the Democratic Party, with a caption reading, "I wonder if I am his Valentine?"

Romance and friendship have long been expressed through poetry and music. The Library of the Institute for the Study of Women in Music Collection includes musical scores such as "Seven Love Poems of Emily Dickinson for Soprano and Piano,” transcribed for Soprano and Piano by Janice Macaulay. It includes works including "Extol Thee--Could I? Then I will," "Wild Nights--Wild Nights!," and "The Love a Life can show Below." In the Howard Lutwak Collection you will find "14 Songs of Love with Guitar" by Thomas Campion and arranged for voice and guitar by Richard Pick.