In 1999, the Violet Atkins Klein Papers were donated to Special Collections and Archives by Klein's daughter, Jill Block. Professionally known as Violet Atkins or Vi to her friends, the collection documents Klein's professional writings, including novels, short fiction, and scripts for radio and television. It demonstrates the many phases of the writing process from research, through several drafts, and variations in style and content.

Legal materials illustrate the struggle to get a story published and to have script ideas produced. The collection is a good source for researchers interested in studying the many challenges and difficult experiences faced by writers, particularly women writers, in the entertainment industry in the 1940’s and 1950’s.

The papers are divided into series with the first containing various manuscripts and fragments of works arranged alphabetically by title. Also included are Klein’s notes on ideas and editing. Some folders contain newspaper and magazine clippings that were used as research material in preparing the stories. The portfolio material for Samuel Klein contains assorted papers and clippings for works written under that pseudonym. Another series includes works that were written expressly for, or adapted to, television. These stories were not designated for any one particular television program or series. In fact, not all the scripts in this section were actually produced.

A third series consists of various records and correspondence pertaining to the legal aspects of Klein’s career. Included are copies of contracts and receipts of scripts registered with the Screen Writers Guild. There is also a series of correspondence between Klein and her agent documenting some of the difficulties she experienced in her attempts to sell her work to the studios. Another contains scripts that were aired as part of the Treasury Star Parade radio program. The U.S. Treasury Department sponsored the Parade in 1942-43 as a promotional tool to increase 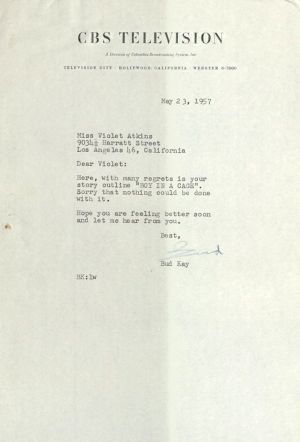 the sale of war bonds. In collaboration with other program writers, Klein helped to create such heart tugging titles as "V for Victory," which aired on Tuesday, July 21, 1942. Some of the scripts included were actually used by performers during the show’s broadcast. In some instances, there are original and revised versions of the script as well as the shooting script. The scripts are marked with the broadcast date and include the cast credits for the episode. Some of the scripts in this section are signed by one or more of the actors and include handwritten notes in the margins.

The collection also includes scripts for the radio program Camel Caravan, a musical variety show that ran between 1933 and 1954 that was sponsored by Camel Cigarettes. They include the broadcast date of the performance. Also included in this series are scripts from another radio program, the Camel Hour. There are various drafts of some of the titles as well as the actual shooting scripts. The collection also includes material related to a proposed television series that Klein had tentatively titled The Lost Mailbag. Various proposed story lines for episodes and copies of the treatment that were sent out to the various studios are included in the collection. Also present is correspondence, contracts, and extensive research materials that Klein drew upon for ideas. The series was never actually produced, but the concept was sold and eventually two pilots were aired on ABC in 1973. Both pilots were in the form of television movies, with the first titled, The Letters, and the second titled, Letters from Three Loves.