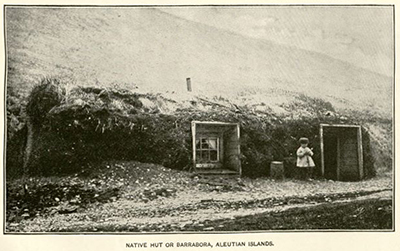 Found in the Arnold Court Collection on Polar Exploration within Special Collections & Archives are two official reports of USRM Corwin, one from 1881 and the other 1884. Both are essentially ship’s logs that report information including weather conditions, navigation coordinates, reports on natives and whalers, and especially anything out of the ordinary, and provide a glimpse of seafaring life ~135 years ago. The Corwin was a schooner/cutter in the ranks of the United States Revenue-Marine established in 1790 within the Treasury Department, and the precursor of today’s US Coast Guard, established in 1915. Built in 1876 by Oregon Iron Works in Portland and commissioned in 1877 in San Francisco the ship was 140 feet long with a beam of 24 feet. She was built as a single-screw steam-powered topsail schooner, meaning she could sail under steam, sail, or combined.

The Corwin enjoyed a long federal career before being reborn as a merchant vessel shortly after her sale and retrofit in 1900. The normal patrol area for the Corwin included the Pacific and Arctic Oceans and the Bering Sea. Leaving her home port of San Francisco in late spring, she made her way north and into the Bering Sea by late May. The Corwin’s duties encompassed search and rescue operations for ships and their crews, customs enforcement, and exploration and discovery which included charting islands and engaging in scientific study.

During the 1881 cruise, the ship carried a small science team. Included in this volume is a report on glaciation by John Muir, best known for his efforts to preserve both Yosemite and Sequoia National Parks, and as the founder of the Sierra Club. The volume also contains a matter-of-fact description of the Aurora Borealis (“Northern Lights”) with past frequency list, descriptive information regarding local wildlife (beluga, walrus, and auk), and a notable volume of ethnographic observations. The Corwin was also part of a larger search for the USS Jeannette, an exploration ship lost in the arctic. Later it was determined that the ship became locked in the ice and was eventually crushed. Starting with a crew of 33 there were only 13 survivors. No sign of the ship was sighted until 1884.

Similarly, the 1884 volume contains short reports and opinions regarding walrus and seal hunting/poaching, whiskey trafficking, and census data for native populations. Reports that are more detailed include “Navigation, Weather, and Currents,” descriptions of a newly identified volcano in the Bering Sea, and a narrative of explorations along approximately 300 miles of the Kowak River. There is also a report regarding the schooner Adele, suspected of seal poaching, being pursued by Lt. J.E. Lutz. During the pursuit, Lutz fired on the Adele which then returned fire. The vessel escaped the US Revenue-Marine.

The detail within the volumes is impressive, and offers different perspectives than those we often encounter today. Early scientific reports can often seem excessively matter-of-fact, having a goal of reporting facts and maintaining scientific perspective. Looking past that matter-of-factness there are kernels of amazing stories.