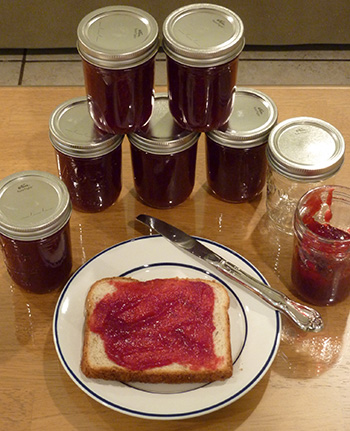 This week's blog post explores several cookbooks from our Culinary Collection, focusing on one main ingredient—cranberries. The cranberry is an indigenous fruit to North America growing in the colder northern regions.  In 1815, American commercial cranberry harvesting began in Massachusetts.  At present, cranberry production in the United States exceeds 110,000 metric tons with annual sales over $1.5 billion.  In 2008, Special Collections and Archives received a large donation of culinary materials from the estate of Kenneth Reichman. The cookbooks in the collection comprise our Culinary Collection and date from the mid-nineteenth century to the late twentieth century. David Sigler, this post's author, reviewed cookbooks in the collection and found a few recipes to try.

First, he made Cranberry Salad from the 1930 edition of Fashions in Foods in Beverly Hills. After cooking the cranberries, he added gelatin, lemon juice, diced cashews, celery, and apples. He left the salad in a bunt cake pan in the refrigerator overnight. In the morning, he turned the mold over and onto a plate. The salad was tasty and had a good crunch to it. He liked it so much, he made the recipe a second time for Thanksgiving dinner.

From the 1890 edition of The White House Cook Book, David found a baked cranberry pudding recipe to try. This recipe book gives recipes menus for dishes served to America’s first family and guests at the White House. To make the cranberry pudding, he added butter and two eggs to a breadcrumb mixture, and beat with a mixer. He then stirred in stewed fruit and sugar, and baked the pudding for 40 minutes. Once in the oven, the pudding started to rise slightly after about 30 minutes.  While the pudding's flavor was pleasant, the texture was slightly lighter than a modern commercial pudding. The bread crumbs contributed a slight wheat flavor that seemed out of place. The cranberry flavor was enjoyable, but tastes have clearly changed.

For his third recipe, David tried the 1927 Cranberry roll from The Art of Cooking and Serving. After making and rolling the dough out, he added the cranberries. Once the roll had baked, the overall texture was crunchy like a biscotti.  Because the cranberries were added unsugared, he coated the roll with powdered sugar.  For desert one evening, he dipped pieces of the cranberry roll into melted brandy butter.  The powdered sugar worked well to sweeten the roll and brighten the tart cranberries.

His last recipe, for Cranberry Milk Sherbet, came from the 1932 edition of Good Housekeeping's Book of Meals. To make the sherbet David cooked cranberries in water until they popped open, then strained the mixture. After stirring in some sugar, he chilled the mixture, and then added lemon juice, milk, and cream. After 25 minutes of churning in his ice cream maker, he put the sherbet in his freezer to firm it up. The sherbet is creamy, with a pleasant cranberry flavor that is apparent but not overwhelming, similar to the offerings at boutique ice cream parlors. Overall, the experience of trying older recipes was enjoyable. Stop by Special Collections and Archives to read our hundreds of cookbooks.