The Tom & Ethel Bradley Center contains over 100 images of the greatest heavyweight boxer of all time, Muhammad Ali.The images featured here were taken by photographers Harry Adams and Guy Crowder, both of whom documented the African American community in Los Angeles during the second half of the twentieth-century. Muhammad Ali was born Cassius Marcellus Clay Jr. in Louisville, Kentucky on January 17, 1942. His life changed forever when he told Louisville police officer and boxing coach Joe Martin that he was going to “whup” whoever stole his bicycle. Ten years after his bike was stolen on February 25, 1964, Clay would become the youngest boxer at age 22, to take a title from a reigning heavyweight champion when he scored a TKO (Technical Knockout) against the intimidating Sonny Liston. 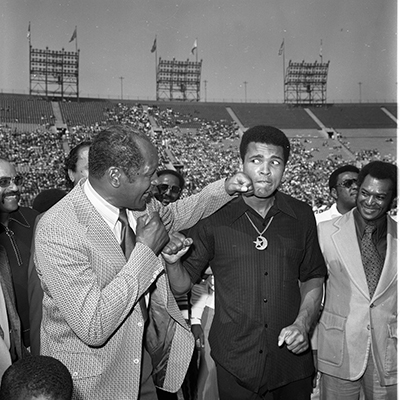 Three years before winning the heavyweight title, Clay had another life changing encounter of a different sort. Unknown to some, Clay acquired his trash-talking flamboyant self-promoting showmanship after meeting wrestler George Raymond Wagner, AKA “Gorgeous George” in Las Vegas in 1961. Clay was impressed by how Gorgeous George’s flamboyant act filled seats at his wrestling matches. Using his own version of George’s flamboyancy Ali’s fights started to sell out. Many in the crowd may have come to see him win, but the rest came to see him lose.

After the Liston fight in 1964 Clay became a member of the Nation of Islam and changed his name to Cassius X and finally Muhammad Ali. The Nation of Islam is a religious and political organization founded in 1930. Black unity is at its core and it seeks to empower Black people by giving them a positive self-identity. They were often called anti-white, a KKK equivalent, and worse. In March 1966, when Ali refused to be inducted into the armed services based on his religious beliefs, he became the most hated man in the country, and began fighting a wrongful conviction for draft evasion.

Muhammad Ali sacrificed the prime years of his boxing career for his religious beliefs. He was systematically denied a boxing license in every state and stripped of his passport. He did not fight from March 1967 to October 1970 as his case worked its way through the appeals process. However, during that time public opinion began to turn against the war. The sacrifices Ali made for his beliefs transformed him beyond being just a boxer and his popularity increased. His conviction was overturned in 1971.

Ali re-entered the boxing world with the same conviction he had about punishing the bike thief. This time it was about retrieving the heavyweight crown. On March 8, 1971 Muhammad Ali and heavyweight champion Joe Frazier engaged in the “Fight of the Century.” Frazier delivered Ali his first professional defeat. In 1974, Frazier and Ali met again after Frazier had lost the title to George Foreman. Ali’s defeat of Frazier in this second fight set the stage for him to face Foreman in Kinshasha, Zaire on October 30, 1974. At 32 years old Muhammad Ali did not enter the ring in Kinshasha, as the brash 22 year-old who faced Sonny Liston ten-years earlier. He was a brash 32-year old who once again upset the boxing world.

At 32, Ali was still a master in the ring so he adjusted his strategy for his age. Ali tricked the powerful George Foreman into punching himself out while introducing the world to his “Rope-a-Dope” strategy. In the eighth round against all odds Ali dropped an exhausted George Foreman to regain the heavyweight championship title. This was perhaps his greatest feat in the ring. Muhammad Ali was a man and a fighter in the greatest sense of the word. And like many a fighter he stayed in the ring too long.

After winning the championship for a second time he continued to fight until 1981. Ali fought 14 more fights including two against Leon Spinks, losing the title to Spinks in February 1978 and winning it back a third time in September of that same year. Over the next three years he lost two more fights before hanging up his gloves. During his career Ali absorbed thousands of blows to the head. In 1984, he was diagnosed with Parkinson’s syndrome. Ali continued to live his life on his terms for next 32 years and passed away in 2016. In the beginning of his career Ali was hated by many, but over the course of his time on this earth he became a beloved figure by all.