A History of Classical Guitar Construction

Some Peek in the Stacks blog posts are authored by CSUN students who work in Special Collections and Archives in the Oviatt Library. This week's post was written by Joey Pielucci, student assistant and this year's recipient of the Ronald C. and Elizabeth-Ann Purcell International Guitar Research Archives Fellowship. Joey is a senior majoring in Guitar Performance. 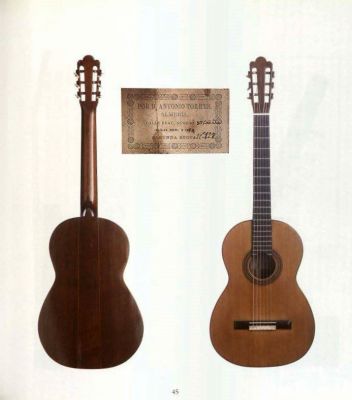 The International Guitar Research Archives consists of many books and periodicals donated from the personal collections of various figures in the guitar community. Much of this material focuses on the history of important players and composers of the instrument. An interesting topic that is sometimes overlooked is the history of the actual instrument itself, especially when it was created, how it changed over time, and who its builders were. With a focus on this history, we look to three important resources, The Development of the Modern Guitar by John Huber, Classic Guitar Construction by Irving Sloane, and Guitars Through the Ages by James Westbrook.

By the eighteenth century plucked instruments like the five-course (double stringed) guitar, Spanish vihuela, and lute had been common in Europe for centuries. It is believed that the earliest six-string guitar was made by Gaetano Vinaccia, a member of the family of Italian luthiers about 1779. Over time, advancements in tuning, music notation, and construction techniques became standardized across Europe, creating the basic template on which guitars were designed and built. Although there remain many differences of opinion among guitar makers, certain principles have remained unchanged, and the modern classical guitar is functionally the same instrument that it has been since its earliest days.

Compared to the modern guitar, the guitars of the 19th century were visibly smaller with thinner waists, and usually had shorter string lengths. They were played by great guitarists including Sor and Aguado, and even by famed composers like Berlioz and Paganini. Then as now it was common for renowned players to collaborate with luthiers to develop louder and better sounding instruments. The best example from this time is Fernando Sor working with French maker Rene Lacôte and Italian maker Louis Panormo.

After popularity of the guitar waned for part of the 19th century, interest in the six-string guitar was reawakened by luthier Antonio de Torres. At first look, a Torres guitar looks remarkably similar to a modern instrument, a sign of his lasting influence. Torres increased the body size, body depth, and effectively standardized the string length for future makers. His most important contribution was his focus on the top of the guitar, the "soundboard." To prove his point in the importance of a well-made soundboard, he built an experimental guitar with the sides and back made out of stiffened cardboard in 1862. He wanted to show that it didn’t matter what materials the sides and back were made out of, because the top was the primary factor in how good a guitar sounded. Those who were able to hear that guitar and Torres’ other guitars in general accepted the importance of a quality soundboard. It remains a focal point in modern guitar construction. 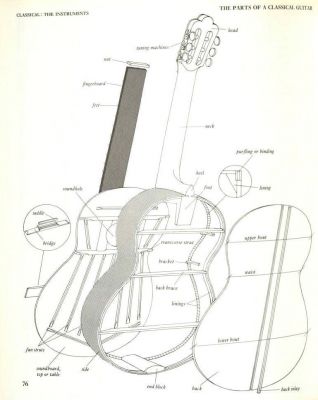 were based on his designs. The first important makers after Torres were the Ramírez family, whose guitars were introduced to the world by the undisputed main figure of the guitar in the 20th century, Andrés Segovia. Segovia's most important contribution to the development of the guitar was his invention of nylon strings. During WWII, there was a shortage of Segovia’s favorite gut strings, the material used on plucked instruments for centuries. After his collaboration with Albert Augustine, they developed nylon strings that were louder, more consistent, and that had better longevity than gut. Guitars thereafter were designed with nylon strings, and with Segovia’s technique and sound in mind. This meant even bigger and deeper bodies, stronger necks to support higher tension strings, and various other developments to create louder instruments.

Since the classical guitar reached worldwide recognition, builders from around the world have made new developments in design, and have even collaborated and shared ideas for the sake of creating the best instruments possible. As Huber notes, "...even in Spain, the modern guitar has come far from its Andalusian origins; it is no longer 'Spanish,' but truly international." It is for this reason that today, no matter what culture a guitar builder comes from or the country a guitar is built in, there are universal standards for what a guitar should look, sound, and feel like to the player. The guitar has come a long way over the centuries, and knowing its history makes it easy to appreciate the wonderful instrument that we have today.