Some Peek in the Stacks blog posts are authored by CSUN students who work in Special Collections and Archives. This week's post was written by Katherine Sirca, a student assistant in the Old China Hands and Urban Archives. Katherine is an undergraduate majoring in Business. 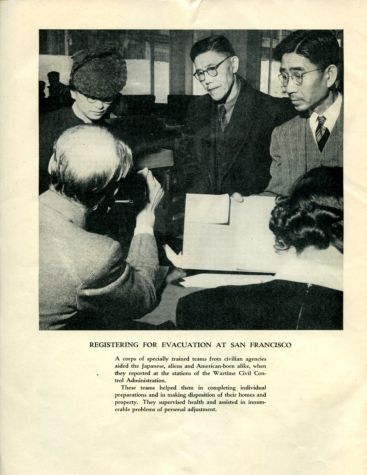 Born from the wartime hysteria of World War II, the internment of Japanese Americans is considered by many to be one of the biggest civil rights violations in American history. Americans of Japanese ancestry, regardless of citizenship, were forced from their homes and into relocation centers known as internment camps. The fear that arose after Japan's attack on Pearl Harbor created severe anti-Japanese prejudice, which evolved into the widespread belief that Japanese people in America were a threat to national security. On February 19, 1942, President Franklin D. Roosevelt signed Executive Order 9066, giving the government the power to begin relocation.

Executive Order 9066 placed power in the hands of a newly formed War Relocation Authority, the WRA. This government agency was tasked with moving all Japanese Americans into internment camps all across the United States. The War Relocation Authority Collection is filled with private reports explaining the importance of relocation and documenting the populations of different camps. WRA Report No. 5 on Community Analysis prepares the reader for the different ways and reasons for which the "evacuees" might try to resist, and how to handle these situations.

This order of internment was met with resistance. There were Japanese Americans who refused to move, allowing themselves to be tried and imprisoned with the goal of overturning Executive Order 9066 in court. The Japanese American Internment Camp Materials Collection showcases the trials of Gordon Hirabayashi and Minoru Yasui, two men who had violated the relocation order. In the case of Japanese-American Gordon Hirabayashi, an entire defense committee was created to garner funding and defend him in court. The case made it all the way to the Supreme Court, where the President's orders were declared constitutional and Hirabayashi was pronounced guilty. Minoru Yasui v. The United States met the same fate, with the justification that Yasui had renounced his rights as a citizen when he disobeyed the orders of the state.

While many fought this Order in the court system, non-Japanese Americans found other ways to voice their dissent. Church groups provided boxed lunches for Japanese people as they left for internment camps, but even this simple act of charity was met with contempt. Letters and postcards from the Reverend Wendell L. Miller Collection admonished one group of churchwomen, exclaiming that they were traitors for helping "the heathen" rather than the American soldiers fighting for their country. >

This general hatred for Japanese people and their sympathizers kept forced internment alive until 1944, when Executive Order 9066 was finally proven to be unconstitutional and was rescinded. While people's prejudices did not end with the Order, the country was facing economic trouble that made keeping these costly internment camps open a strain. War Relocation Authority Director D.S. Meyer admitted in a letter from as early as October 1942 that reabsorbing internees back into American society "is the most practical solution for the economic and social problems created by the evacuation of these people." This document from the Relief and Support Groups for Japanese Americans during World War II Collection suggests that the United States had done itself a disservice by not considering the contributions of Japanese Americans to society. Many materials on Japanese American internment are available online in the CSU Japanese American Digitization Project.