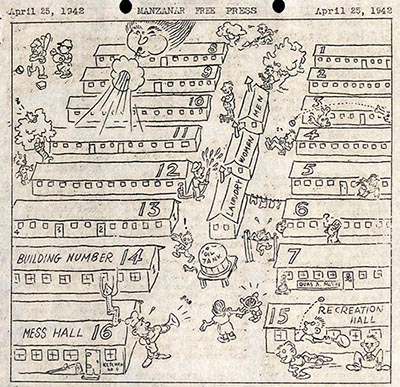 Executive Order 9066, signed by President Franklin D. Roosevelt on February 19, 1942, resulted in the forced removal of Japanese Americans living on the West Coast of the United States, most of whom were US citizens. Americans of Japanese descent were ultimately incarcerated in ten camps around the US administered by the War Relocation Authority (WRA).

The Japanese-American Relocation Center Newspaper Collection contains newspapers and newsletters produced by inmates in the Gila River and Poston camps in Arizona, the Jerome and Rohwer camps in Arkansas, the Manzanar and Tule Lake camps in California, the Granada camp in Colorado, the Topaz camp in Utah, and the Heart Mountain camp in Wyoming. Newspaper issues included in the collection are full of first-hand information about the lives of incarcerated. Articles address a host of issues, including those that focus on mess halls and other communal spaces, school events, baseball leagues, dances, and more. Broader issues of interest in every camp are also prevalent, including the loyalty questionnaire used by the WRA to determine the "Americanness" of incarcerated adults, the subsequent segregation at Tule Lake of those deemed "disloyal" via the questionnaire, the status of Korematsu v. US, and information about Japanese Americans serving in the military overseas.

Selections from the collection are currently on display in the Library Exhibit Gallery, along with a set of posters developed as part of the CSU Japanese American Digitization Project. As a part of the project, fifteen CSU campuses worked together to digitize letters, photographs, newsletters, and other materials that document the experiences of those imprisoned in camps during the war. Documents from Special Collections and Archives are just some of thousands included in the CSUJAD web portal.