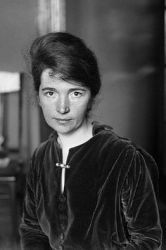 Margaret Sanger was one of the most influential advocates for the suffrage movement and women's rights in the twentieth century. Yet, Sanger's views on women's rights did not always coincide with the National Woman Suffrage Association and other suffrage groups that were primarily made up of middle and upper middle class white women. Sanger's early experiences as one of eleven children, and her career as a visiting nurse in the slums of East Side New York, made her particularly concerned about the needs of working class women, their often dismal economic conditions, and the need for birth control. For Sanger, getting the vote wasn't enough; women deserved bodily integrity, personal autonomy, and self-determination.

The Comstock Act, enacted in 1873, was a federal law that defined contraceptives as illicit and obscene and prohibited "the dissemination of pornography, abortion devices, and any other drug, medicine, article, or thing designed, adapted, or intended for preventing contraception." Decades later, Sanger began to address the lack of information about birth control by writing a sex education column called "What Every Girl Should Know" for The Call, a socialist newspaper, and in 1914 founded a monthly newspaper, The Woman Rebel, both of which included birth control information. Sanger was arrested for violating the Comstock law, but due to growing public support for revision to the law, charges were dropped. 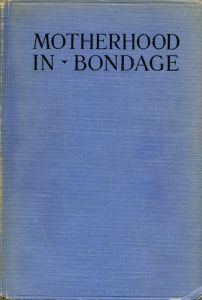 district of Brooklyn. The clinic was closed by police ten days later in violation of New York State obscenity laws. Sanger was arrested with her sister, Ethel Byrne, a nurse at the clinic, and Fania Mindell, a clinic translator. Sanger was convicted and sentenced to thirty days of imprisonment at the Queens County Penitentiary.

Sanger's work is often associated with the Eugenics Movement. Progressive Era eugenicists believed in the genetic superiority of Nordic, Germanic, and Anglo-Saxon people. They supported forcible sterilization of the poor, and advocated for immigration and anti-miscegenation laws they believed would lead to the evolution of a superior race. Sanger writes, "Eugenics is suggested by the most diverse minds as the most adequate and thorough avenue to the solution of racial, political and social problems…the most urgent problem today is how to limit and discourage the over-fertility of the mentally and physically defective." There continues to be lively debate over Sanger's involvement in the Eugenics Movement, whether she was a true believer in eugenic principles, or merely used its popularity to broaden her support base.

By 1920, women had won the vote, could own property, and pursue higher education, yet many working class women, women of color, and immigrant women lacked the information and the means to exercise their reproductive rights. Sanger would go on address these issues for years to come, publishing many books, newsletters, and pamphlets such as Woman and the New Race, Motherhood in Bondage,  Birth Control Review, Debate on Birth Control, and Questions and Answers About Birth Control. Sanger established the American Birth Control League in 1921 and the Birth Control Clinical Research Bureau in 1923, the country’s first legal birth control service provider. Fifteen years later the two organizations would merge to form the Birth Control Federation of America, which would later become the Planned Parenthood Federation of America.