Segovia in the Sundial

This semester, some Peek in the Stacks blog posts will be authored by CSUN students who work in Special Collections and Archives in the Oviatt Library. This week's post was written by Carlos Vazquez, a student assistant in the International Guitar Research Archives. Carlos is a graduate student in the Guitar Performance program.

The student newspaper at California State University, Northridge (CSUN) is the Sundial. It was first published by Associated Students in February 1957. The Oviatt Library has catalogued the Sundial in its entirety and many issues are available online through the Oviatt’s Digital Library. Over the years, the Sundial has reported on a wide variety of topics, including articles about distinguished guests whose visits to CSUN have made vital contributions to campus life. World-renowned classical guitarist Andres Segovia remains one of our most important, influential, and beloved visitors.

Andres Segovia was born in 1893 in Linares, Jaén, Spain, and died in 1987 in Madrid. Segovia is known for his virtuoso performances, and many believe he is singularly responsible for making the guitar relevant in classical music concert halls. His importance to CSUN comes from the relationship he had with guitar professor Ronald Purcell, founder of both the CSUN guitar program and the Oviatt Library’s International Guitar Research Archive (IGRA). In a 1980 Sundial article titled "Guitar Program Ranks Top in Nation," Purcell explains that Segovia was not only his teacher and mentor, but an important consultant in the creation of the guitar program. As Purcell noted "At the time, I could honestly claim four or five good guitar majors... there are now 53 full-time guitar majors." Purcell passed away in 2011, but his legacy lives on, as both the founder of the guitar program and IGRA. 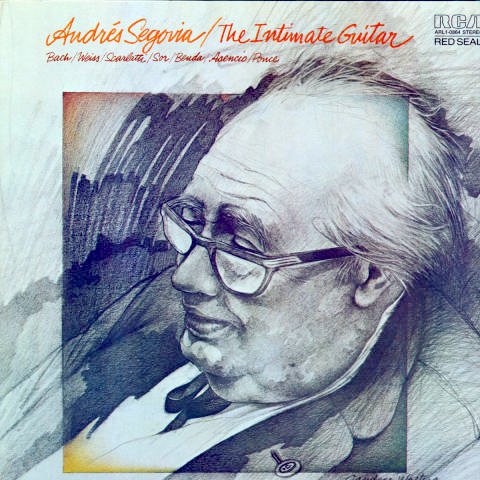 Segovia’s visits to CSUN often consisted of concerts and masterclasses. An early article about one his appearances can be found in a 1975 issue of the Sundial. The article, titled "Segovia Visits CSUN Musicians," is about a masterclass that Segovia taught, and describes both Segovia’s mannerisms and the respect he commanded from students. As the article describes, "The Maestro's entrance into the classroom and his departure was met with enthusiastic applause, to which the Maestro, upon both accounts, replied, 'You applaud, but I have not played anything.'"

In a 1977 Sundial article titled "A Visit by Segovia," the journalist illustrates how blunt and quirky Segovia could be, noting that "[s]tudents played for Segovia, who told the class he practices for only four or five hours a day. Anyone who 'practices eight hours is not a liar; he is an ass,' he said." This blunt but amusing aspect of Segovia’s personality is what classical guitar students expected from him. One of the most notable Segovia events at CSUN was the focus of a Sundial article titled, "Classic Guitarist Visits CSUN," which describes a masterclass given by Segovia to eight students selected from CSUN, Cal State Fullerton, USC, and UC Irvine.

Sundial articles about Segovia's concerts illustrate the musician’s command of the instrument. A 1983 Sundial article titled, "Segovia's Pavilion Performance Given Accolades," reviewed his performance at the Dorothy Chandler Pavilion in Los Angeles, and advertised his upcoming concert at CSUN. Staff writer Ron Farmer wrote about the repertoire performed, and shared how excited and amazed he was. On Segovia’s performance of a Bach fugue Farmer writes, "Of particular amazement was the performance of the fugue, which to an inattentive listener may have sounded impossible to perform with just one guitar."

Some of the most monumental articles about Segovia’s visits are about the honorary doctorate he received from CSUN. In the Sundial article "Guitarist Segovia to Be Given Honorary Degree," journalist Hali Bernstein writes, "The degree is being presented in recognition of Segovia's impact on the understanding and appreciation of the classical guitar…In the past 20 years, the CSU system has presented only 18 honorary degrees." The ceremony and recital took place on February 18, 1983, Segovia’s birthday. After performing Segovia received his honorary doctorate, and thanked CSUN for honoring him with the degree. As reported by the Sundial, Segovia said, "I would also like to congratulate the university and Mr. Purcell for helping to make the classical guitar an important part of its music program, and I repeat with absolute sincerity that I feel much moved by the honor that I have received here."