Africans forcibly transported to the Americas, removed from their homes, families, and cultures utilized various forms of passive and active resistance. These men, women, and children were forced to take new names and create new families. They were bred, bought, and sold, and active resistance was immediately and harshly punished. 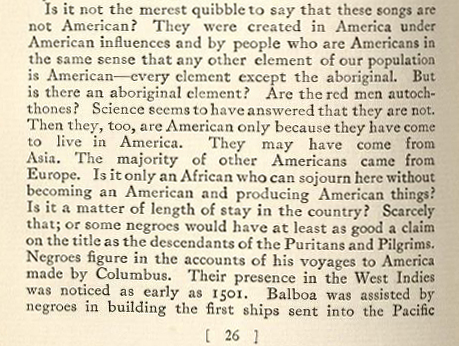 Many slave-owners allowed their slaves only work songs and spirituals. These types of songs led owners to believe that their slaves were accepting their place in society, and their conversion to a new Christian faith.

Music can make work seem easier and the work day go by faster, and song lyrics often included coded messages. These songs could fuel emotions toward a common cause, provide directions along the Underground Railroad, or call slaves to open rebellion. Common imagery in spirituals include the Exodus as an allusion to their own freedom from slavery, the River Jordan as analogous to the Ohio or Mississippi River depending on one's geographic location, Moses as a conductor of the Underground Railroad, and the Heaven-bound soldier as an abolitionist.

The study of these songs illuminates the lives and motivations of those held in bondage. They offer a look into the everyday lives of African and African-American slaves and can highlight hopes, fears, dreams, and nightmares. Special Collections and Archives houses a number of materials that reflect this topic, including sheet music and lyrics: Slave Songs of the United States, published in 1867; Afro-American Folksongs: A Study in Racial and National Music by Henry Edward Krehbiel, published in 1914; Negro Songs from Alabama collected by Harold Courlander with music transcribed by John Benson Brooks, published in 1960; Songs of Work and Freedom by Edith Fowke and Joe Glazer, published in 1960.