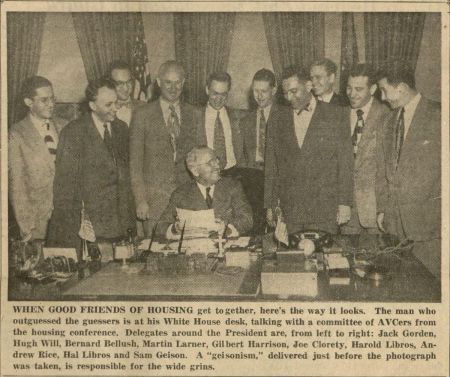 Veterans Day began as Armistice Day, intended to recognize the end of World War I at the 11th hour of the 11th day of the 11th month of 1918. It was first celebrated in 1919, and continued as Armistice Day until 1954, when the holiday was renamed Veterans Day in order to recognize all service personnel in the United States Armed Forces. Unlike Memorial Day, which recognizes military personnel who died in service, Veterans Day celebrates all those who previously served in the United States Armed Forces and who were not dishonorably discharged. In honor of the 100th anniversary of Armistice Day, this post features several collections with materials related to veteran organizations and causes.

Materials from the Jewish Federation Council of Greater Los Angeles, Community Relations Committee Collection, Part 2 and Part 3 document the activities of specific veterans groups through brochures, correspondence, and press clippings with advice addressing societal and soon-to-be former soldiers' concerns with re-entry into civilian life. Newsletters and other publications created by specific organizations help veterans keep in touch, have pride in their service, and continue to contribute to communities as civilians. Common themes across veterans' organizations in the post-World War II period include a need to address housing shortages, education, and job opportunities.

Many materials document the activities of the American Legion, formed in 1919 by war veterans from the American Expeditionary Forces. The American Legion played a key role in creating the Servicemen's Readjustment Act, better known as the GI Bill, which provided a number of benefits to veterans. This included support for tuition payments and living expenses while a veteran attended high school, college, or vocational school. Before the GI Bill passed in 1944, the Legion created a series of one-minute radio spots, two-minute motion picture trailers, and news trailers to spread information and gain support for it throughout the United States.

Unlike the more conservative viewpoint of the American Legion, the American Veterans Committee was founded in 1943 as a liberal veterans group with the motto of "Citizens First, Veterans Second." In addition to taking an interest in common veteran issues like housing, the AVC also took on other social issues, such as the equal recognition of all veterans regardless of their backgrounds. One photograph caption from a May 1949 issue of their newspaper The AVC Bulletin noted that, "Before the Yuba-Sutter Chapter of AVC protested, the names of the Yuba County, Cal. Japanese Americans who served in World War II were placed on a separate list on the county honor roll. On the Fourth of July, members of the chapter, led by Bob Worth, rearranged the names in alphabetical order in one group."

Materials from the Daughters of the American Revolution Fernanda Maria Chapter Collection and Daughters of the American Revolution Don Jose de Ortega Chapter Collection document advocacy for veterans by groups not centered solely on veterans' affairs. This includes volunteer work at Veterans Administration hospitals and other non-VA facilities that serve veterans, as part of fulfilling the DAR's patriot objective.