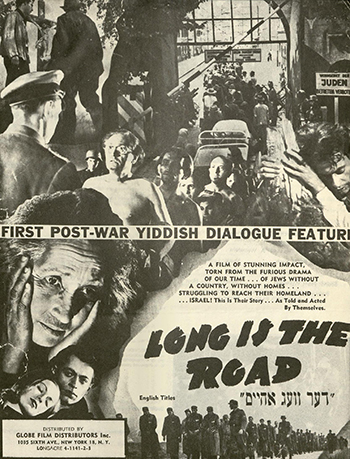 The Los Angeles Community Relations Committee was founded in the early 20th century to work with the Anti-Defamation League (ADL), B'nai B'rith, the American Jewish Committee (AJC), the American Jewish Congress, the Council of Jewish Women, and other Zionist organizations to fight anti-Semitism in the United States. In 1941 the organization changed its name to the Community Relations Committee (CRC) of the Jewish Federation Council of Greater Los Angeles. The organization’s founding mission continued as a central focus throughout the 20th century, alongside a number of other local and international concerns. These included resettlement of refugees from Eastern Europe on the West Coast, denazification in Germany, immigration, religion in public schools, communism, civil liberties, discrimination in housing, fair employment practices, inter-racial relations, religious tolerance, and stereotyping in the motion picture industry.

The records of the CRC are voluminous, and span from the early 20th century into the beginning of the 21st century. The Jewish Federation Council first deposited records in the Urban Archives Center in 1979, with an initial group of records documenting their work from approximately 1933 to 1947, and made additional deposits in 1983, 1987, 1997, and 2005. Generous gifts and grants enable ongoing work to process the collection. Parts 1, 2, and 3 are currently available for research, and Part 5 will be available to researchers later this year.

The CRC collections contain correspondence, meeting notes, ephemera, and other records that document the work of the Hollywood Committee. As part of this Committee, Los Angeles film industry professionals played a significant role in combating discrimination and antisemitism. On a local level, they monitored and reported discriminatory film industry hiring practices and workplace environments. Nationally, they monitored the creation of new media and the distribution of old media, such as silent films with racist themes. The Hollywood Committee built a strong communication network to record and distribute information to support their mission. In 1938 the Committee was renamed the Motion Picture Division.

Materials related to the Motion Picture Division include an address delivered by Harry M. Warner to Warner Brothers studio employees and their spouses on June 5, 1940 titled "United We Survive Divided We Fall!" The printed edition of his speech implored the audience to turn over those that would oppose Americans of any background to the local F.B.I. district leader, Arthur Cornelius, Jr. Warner noted that Cornelius was in the audience as an invited guest, as Warner did not "want him to think that we in the picture business just play parts for make-believe. We want to get together and help him and prove to him that we are serious - that this is not a picture – this is a very serious life drama, and he will play a part with us."

The Division also recorded its assessment and approval of the 1945 short "It Happened in Springfield." The short dramatized an educational program began in 1939 in Massachusetts that attempted "to teach young people that persons of all faiths and creeds can live together, work together, play together in cultural unity and understanding." The test program intended to be "a national laboratory in education for democracy." The Division continued its work after World War II, screening films and reviewing scripts to monitor the depiction of the Jewish community in media. Local CRC members often worked in tandem with the National Community Relations Advisory Council’s Mass Media Committee on Motion Pictures. Later in the 20th century the national Jewish Film Advisory Board led work to combat racist depictions in media through reviewing scripts and educating screenwriters and executives on the need for Jewish film characters that depicted real individuals rather than harmful stereotypes.

For more insight into CRC’s work combating antisemitism and discrimination, see our other Peek in the Stacks blog posts with materials from the Jewish Federation Council of Greater Los Angeles, Community Relations Committee Collections. These include The Study of Antisemitism, Fighting Antisemitism, America First: Variations on a Theme, Wartime Jewish Émigrés, and Documented Refugee Experiences.