April is national poetry month and Special Collections and Archives has a wide array of poetic works across a variety of themes, spanning hundreds of years. Among these works are both contemporary and antiquarian books written by American people of color. Each of these poets have lived in different times and places, and have had very different life experiences that influenced their poetry. While some of their poems follow established style norms and standard poetic themes, others have taken a less traditional path, breaking free of traditions and utilizing their work to express controversial themes and ideas. 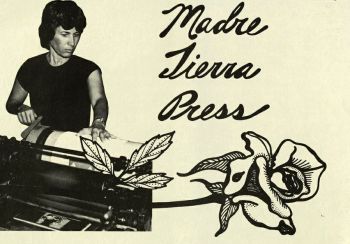 Mary Weston Fordham was a free person of color from an affluent family in South Carolina. Mary grew up having opportunities that other African-Americans of the time did not have in the pre- and post-Civil War era. She was able to attend school and complete her education, and afterwards opened her own school for African-American children. She later published a volume of poetry, Magnolia Leaves, which was endorsed by Booker T. Washington. In his introduction to the book Washington writes, “...I believe [Magnolia Leaves] will do its part to awaken the Muse of Poetry which I am sure slumbers in very many of the Sons and Daughters of the Race of which the Author of this work is a representative.” Fordham’s book is written in the traditional Victorian style of light biblical and nature based themes.

In some cases, poetry is combined with imagery to express thoughts and feelings. Portfolio of Twelve Chicana Women Artists was published by Madre Tierra Press, and consists of silk screened art works created at the Women’s Graphic Center in June 1982. Editor, Linda Vallejo was asked by the Women’s Graphic Center to coordinate a publication based on a prompt. Individual artists were asked to respond to the concept of Madre Tierra or as Linda puts it “...the ‘Great Mother’ in her life.” The women participated in group meetings during which they expressed their personal beliefs, and then each designed and printed a visual and/or textual work that expressed their thoughts and feelings about the Madre Tierra experience. Though not all the pieces have poetry in them, three of the twelve artists, Josefina Gallardo, Judy Miranda, and an unknown artist, expressed their responses combining language and visual art. Gallardo writes about her passion as a Danzante, Miranda writes about photography’s representation, and the unknown artist uses metaphors to express their views on the universe.

Ramón "Ray" Durem was born in Seattle Washington in 1915 to mixed race parents. While at the University of California t Berkeley in 1931, he joined the Communist Party. Durem left the Communist Party after World War II when, as he later wrote, he “discovered that even the white radicals were not interested in a radical solution to the Negro Question.” Durem's poetry primarily focuses on his experiences as a "white passing" person whose work was shaped through his unique perspective. Since he was white passing man, he observed first-hand the racist commentary and behavior of white people toward African Americans. Durem's poems were first published in the Crusader, edited by Black Nationalist leader, Robert Williams, and later in literary journals, Phylon and Venture, and in the Herald Dispatch newspaper. In Take No Prisoners, published posthumously in 1971, Durem expresses his anger about the things he hears in his daily life, about the emotional and physical harm that African-American people had to endure, and about the differences he encounters on a regular basis.